The TH7DX is one of the most popular high-end HF amateur radio antennas, originally designed and prototyped by Hy-Gain Electronics in 1981. 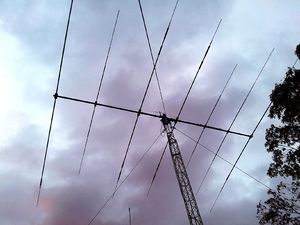 Roger Cox WBODGF was the sole design engineer for this antenna development located at Telex/Hy-Gain in Lincoln, Nebraska. It was developed in 1981 and offered for sale in 1982. Generally, the new Hy-Gain Electronics products like this one would be introduced at the popular Dayton 'hamvention'. Mr Kit Kitterer, W6AUF (dec), was the National Sales Manager for Amateur Products at that time. He was followed by Sid Kitrell W0LYM (dec), Norm Hansen W0RAN (now W0HI), John King KF0EQ, Al Caplan K4AVQ (dec) and Barb Woerner KA0GON before the Hy-Gain antenna line was sold to MFJ in May 1999.

The Hy-Gain company filed for bankruptcy in 1977, burdened by some $31 million in debts. Andy & Ted Andros were the owners of Hy-Gain at that time and made some poor decisions during the conversion from 23 to 40 channel CB radios. Roger was in Las Vegas at a Ham Radio convention at the time (and also on his honeymoon) when the company went under. Kit called us down to talk about it at the same time my mother-in-law was calling Roger's wife to tell her. Luckily, Kit picked up the hotel bill and we already had the flight home paid for. Waiting a couple months to see if they would re-open, but eventually Roger took a job with Rockwell-Collins in Cedar Rapids, IA. When Telex purchased Hy-Gain, Kit asked Roger if he wanted to come back. Roger returned to Lincoln and Hy-Gain in June 1979. Kit eventually had to move from Lincoln to Minneapolis, where the company headquarters were based. He wasn't too pleased about the move, though. When he retired, Sid Kitrell and then Norm Hansen took over the Sales.

The TH7DX was designed as a broad band HF beam in response to compete with the new KLM KT-34 and KT-34XA. At the time, Hy-Gain's biggest tribander was known as the TH6DXX, designed by Howell "Howie" Pabian, W0QAN. Howie had actually let his ham radio license expire and was unlicensed for many years, but eventually got his original callsign back. The TH7DX evolved from the TH6DXX by adding a second driven element and feeding the pair of elements out of phase, similar to a log-periodic array cell of 2 elements. The VSWR was manually optimized to cover as much of each of the 20, 15 and 10 meter bands with under 2.0 VSWR. The azimuth pattern was also optimized at the same time to produce F/B higher than 20 dB across as much of each band as possible.

It is important to recognise this antenna was developed prior to the development of accessible antenna modelling and optimisation software. As a broadband antenna, the intent was to meet the needs for pretty much every amateur radio operator in a meaningful way.

The antenna is a heavy duty design, intended to cope with the ice and snow loading for those radio operators located in northern hemisphere, as well as extreme heat found in Africa and Australia. The often heard poignant phrase ‘built like a battleship’ rings true.

There were only two formal models produced, the TH7DXS which was supplied with all stainless steel hardware and the TH7DX which has a combination of stainless steel fasteners and some zinc plated clamps.

There was a TH7DXX that did appear in litererature and marketing, but this was never a model. A probable thow-back to the grandfathered TH6DXX antenna.

Further digging shows that no records of sale could be found thru formal channels, but looking at ham station photos and reports in magazines and handbooks, the TH7 is in use in just about every Country and radio entity throughout the world.

One of the widespread quirks of amateur radio operators is their desire to customise or optimise a piece of equipment to suit their own interests. The TH7DX antenna was not immune to such requests or fiddling. These included:

Retrieved from "https://ethw.org/w/index.php?title=Hy-Gain_TH7DX_Antenna&oldid=93868"
Categories:
This page was last edited on 15 November 2013, at 18:27.
About ETHW
Policies and disclaimers