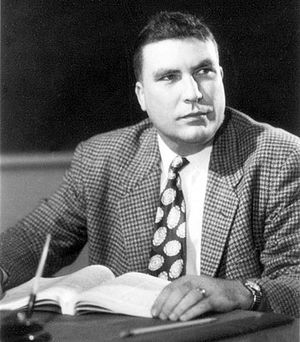 Herbert York was born on November 24, 1921, in Rochester, New York. He received his B.S. and M.S. from the University of Rochester in 1943, and his Ph.D. from the University of California in 1949. Upon leaving Rochester, he joined the Manhattan Project as a physicist at Ernest Lawrence's Radiation Laboratory at Berkeley and at the Oak Ridge, Tennessee's Y-12 plant, where he worked on the electromagnetic separation of uranium 235.

After World War II ended, York completed his doctoral studies at Berkeley and co-discovered the neutral pi meson. He became an assistant professor of physics there in 1950 and oversaw the expansion of the California Radiation Laboratory to become the Lawrence Livermore Laboratory, of which in 1952 he became the first director. In addition, he has held numerous positions in government, including Chief Scientist of the Advanced Research Projects Agency, Director of Defense Department Research and Engineering.

York served as Chancellor of the University of California, San Diego, from 1961 to 1964, and again from 1970 to 1972, and currently serves as the university's Director Emeritus of the Institute on Global Conflict and Cooperation and chairman of the Scientific and Academic Advisory Committee, which oversees activities at both Livermore and Los Alamos National Laboratories.

Additionally, York has written some 75 articles and several books, including Race to Oblivion: A Participant's View of the Arms Race. His awards include the E.O. Lawrence Prize (1964), a Guggenheim Fellowship (1972-73), and the American Physical Society's Leo Szilard Award for Physics in the Public Interest (1994). In 2000, President Clinton named him a recipient of the Enrico Fermi Award for his efforts and contributions in nuclear deterrence and arms-control agreements.