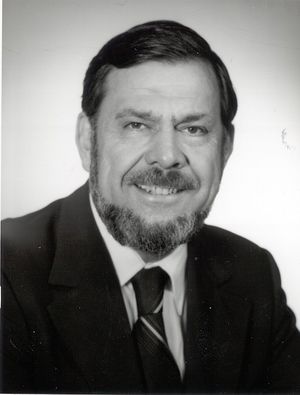 Harry Winston Mergler was born on June 1st, 1924 in Ohio, and was educated at MIT, Brown University and the then Case Institute of Technology, where he earned a PhD. His professional career began with the National Advisory Committee on Aeronautics at the Lewis Flight Propulsion Laboratory, where he designed NACA’s first large computer facility. In 1948, Dr. Mergler created the first documented coupling of a computer with a remote machine tool, an operation he worked to perfect over his year at NACA until he returned to Case in 1957.

During the period 1950-1957 Dr. Mergler moved into the emerging digital technology and continued his computer-controlled system research. Significant contributions made by Dr. Mergler during this period include the optical tape reader, the ultra-high speed hybrid multiplier, methods for digital frequency division and smoothing, and linear and conic interpolators operating in the incremental digital mode.

During the 1960s Dr. Mergler's research was centered on the controlled manipulation of robotic devices for handling radioactive material in the Space Nuclear Propulsion Program. Dr. Mergler and his graduate students developed the computer-control techniques which resulted in the “Case Arm" with its seven articulated axes operating under coordinated computer control. This project and its by-products culminated in a multi-axis, self-adaptive, learning and seeing manipulator which performed the dis-assembly and reassembly of an A-5 nuclear reactor core placed in a random orientation.

Dr. Mergler selected the ailing U.S. shipbuilding industry as one where he felt the introduction of modern computer-control technology might solve some of the industry's competitive problems. This work resulted in a self-adaptive, computer-controlled cold forming system which permitted the precise fabrication of ship frame structures at a speed and a degree of accuracy never before obtained by the then current fabrication methods. This system is now in construction in massive scale for the U.S. Navy.

In 1973, Dr. Mergler was appointed to the Leonard Case Chair in Electrical Engineering, where he served until 1989. Dr. Mergler's teaching and research specialty was the digital logic design as applied to embedded control networks in machine-tool controls, aeronautical instrumentation, and industrial control processes. He is the author of the book Methods in Digital Logic Design. One hundred and fifty-one master's and forty-eight Ph.D. students have earned their degrees under Dr. Mergler.

In addition to his domestic consulting activities Dr. Mergler has served as a consultant to the Norwegian government, the National Science Foundation, and the National Aeronautics and Space Administration. He holds 24 U.S. patents primarily in the area of digital compu1crs, aeronautical instrumentation, and machine tool control and is the author of many technical papers. Dr. Mergler was elected a Fellow in the IEEE in 1976 and was elected to the National Academy of Engineering in 1980. He was awarded the IEEE's Lamme Medal in 1978, the Case Institute of Technology Gold Medal in 1979, and the IEEE's Centennial Medal in 1984. He received the Best Paper Award from the IEEE in 1979.