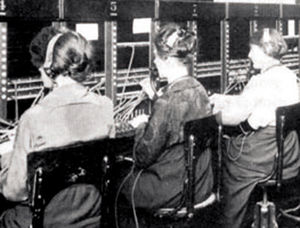 In the early days of the telephone, when the telephone companies employed thousands of women to be operators, it was common to refer to these workers as the “hello girls.” During World War I, some very special hello girls served near the front lines making sure military communication worked.

The United States entered the war in early 1917, well after it was underway in Europe. The Allied and Axis forces had gotten bogged down in trench warfare in France, and it was difficult to maintain good communication between the troops near the front line and the commanders in the rear. The problem was compounded by the fact that the English-speaking troops from the U.S. and Great Britain were working alongside French-speaking troops. One of the first tasks of the U.S. Signal Corps was to establish a bilingual, battlefield telephone system to improve communications. But who would run it? U.S soldiers did not have the necessary skills, nor could many of them speak French.

In November, the U.S. commander, General Pershing, requested from the Federal Government permission to hire 100 French-speaking telephone operators to run the battlefield switchboards, and gave the Signal Corps the assignment of recruiting them. At first, the Corps recruited applicants from the French-speaking areas in North America, including Louisiana and Canada. But of the more than 300 applications received, only six were found qualified. Next, the Signal Corps ran advertisements in newspapers all around the United States. This time, they got 7600 applications. By early 1918, 550 of the women who responded were trained, and 150 had been sent to the front. By the end of the war, over 200 women had served overseas, and training centers had been established in New York City, Chicago, San Francisco, Philadelphia, Hershey, and Lancaster, Pennsylvania, and Atlantic City, New Jersey.

The first contingent of operators to work in Europe was led by chief operator Grace D. Banker, a Barnard College graduate and former instructor at AT&T. The hello girls served in 75 towns in England and France, and were sometimes sent to operate equipment just behind the front lines. For their work, they were paid the same salaries as male soldiers in comparable positions—chief operators earned $125 per month; regular operators earned $60 per month. However, each recruit had to provide $300-$500 to purchase uniforms, including bloomers (a type of pants) to be worn under their dresses. At the end of the war, General Pershing praised the hello girls for their outstanding work, but their job was over. The operator regiments were disbanded, and the hello girls returned to their civilian lives.

Retrieved from "https://ethw.org/w/index.php?title=Hello_Girls&oldid=120067"
Categories:
This page was last edited on 15 September 2015, at 17:36.
About ETHW
Policies and disclaimers