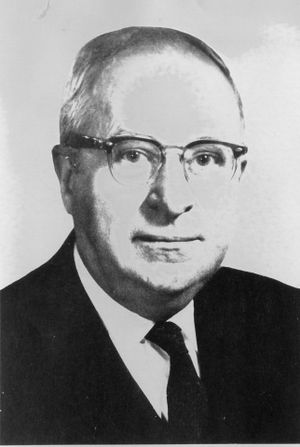 Harry William Houck was horn on April 11, 1896 in New Cumberland, Pennsylvania and was brought up there. It is not recorded that he was born with a silver telegraph key in his hand, but at the age of thirteen, in 1909, he built a crystal radio receiver set, a 3000 watt spark transmitter, and connected them to a high multiple wire antenna through a send-receiver switch. With this equipment he was in contact with a wide circle of other amateurs over considerable distance. The set, though silent now for over 50 years, is still one of Mr. Houck's treasured possessions

The amateur period came to an end with our entry into World War I. Mr. Houck's proficiency at radio had come to someone's attention in the military (the Navy had at times asked him to interrupt his transmission) and late in 1917 Sergeant Houck reported to Captain E. H. Armstrong who was in Paris to develop some of his radio ideas for the Signal Corps. Houck's trip to Paris involved being in a French hospital, escaping AWOL from the confinement, being reported dead, but making it to Paris very much alive. Armstrong was developing his superheterodyne method of radio reception and he found in Houck a collaborator whose drive, craftsmanship and originality were invaluable. They became life-long friends and frequent coworkers in after years.

After the war the association continued in Armstrong's laboratory at home and at Columbia University with the enthusiastic support of such men as Professors Pupin and Morecroft. Here, with Houck as co-inventor, an improved superheterodyne circuit was developed to serve the new broadcast radio field. This second harmonic superheterodyne circuit as designed by Houck was the basis of a large commercial production of broadcast receivers.

In the years 1923 to 1931 Houck was chief engineer of the Dubilier Condenser and Radio Company, and here his inventiveness and research on capacitors led to the "battery eliminator", enabling receivers to operate on straight A.C. house current. In this period, and through the 1930's, Houck was also associated as consultant for or other of a number of other organizations such as Federal Telephone and Telegraph Company and Micamold Radio Corp., and he maintained his close contact with Armstrong working with frequency modulation. By the age of 35 he had contributed widely to the radio field.

In 1940 Measurements Corporation was formed with Houck as president. The goal of this organization was to supply instruments of high accuracy for measurements in the high frequency field of radio. This started a long line of ever improved high quality instruments. In 1953 Measurements Corp. became a division of Thomas A. Edison Industries with Houck as Vice President and General Manager. The same arrangement was maintained when in 1958 a further merger made the McGraw-Edison Company the larger parent organization. Under Mr. Houck's supervision and his active participation in the design and developmcnt the line of instruments was always al the forefront of the art, with many original contributions by himself and his co-workers. The list of his patents grew towards 90. He retired from Measurements at the beginning of 1967.

Mr. Houck was married in 1920 to Maud Stailey, who died in 1969. On his Silver Spray Farm he read extensively in technical literature and follows his other hobby of photography.

Retrieved from "https://ethw.org/w/index.php?title=Harry_W._Houck&oldid=172365"
Categories:
This page was last edited on 8 January 2019, at 19:44.
About ETHW
Policies and disclaimers