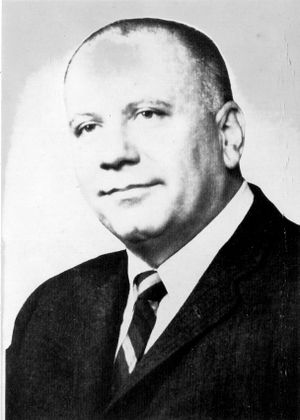 Harold Irving Ewen was born in Chicopee Falls, Massachusetts on March 5, 1922. He earned his B.A. in Mathematics and Astronomy in 1943 at Amherst College where he became the youngest member of the faculty in the history of the College at the time of his appointment. During an informal ceremony one evening at Amherst, his faculty colleagues awarded him the "Doctor of Docs Degree," confirming the nickname "Doc" that has followed him since.

After one year of teaching at Amherst and serving three years as a Naval officer in World War II, he entered the Harvard Gradaute School and received his M.A. and Ph.D. in Physics in 1948 and 1951, respectively. Part-time work at the Harvard Cyclotron Laboratory developed his interest in precise measurements, as well as in the design of associated instrumentation. An early achievement was the design of the instrumentation- which successfully obtained the first external beam from the Harvard Cyclotron. It was at this time that Professor E. M. Purcell stimulated the beginning of Dr. Ewen's career of measurements in the field of passive microwave remote sensing. Working together Professor Purcell and Dr. Ewen successfully detected the 21 centimeter radiation from interstellar hydrogen. Shortly thereafter, Dr. Ewen joined with Professor Bart J. Bok to organize the radio astronomy program at Harvard, where they taught the first graduate courses in radio astronomy in the United States. The graduate program needed a radio telescope and his faculty colleagues suggested that Dr. Ewen form a company for the sole purpose of assembling this telescope. The company would then be dissolved and Ewen would continue a career of graduate school teaching at Harvard. The Ewen Knight Corporation was formed early in 1952 to build this one radio telescope. Requests for similar telescopes were received from several other universities and Government research laboratories before the first telescope was completed. It soon became apparent that the Ewen Knight Corporation would continue to meet the need for new measurement instrumentation, despite the original intent of the founder.

Dr. Ewen's contributions include the development of new techniques of measurement as well as -the performance of passive microwave measurements ranging from radar boresight calibration and earth vertical sensing from satellites to the resolution of atmospheric ozone profiles, the radio properties of lunar subsurface materials and the millimeter wave properties of solar activity.

Through the years, "Doc's" interest in the radio properties of natural phenomena appears to have followed an inverse distance relationship- beginning with interstellar space in the 1950's, followed by the sun, moon and planets during the 1960's, he was engaged in the performance of measurements to aid in determining the useful applications of passive microwave sensors in earth-orbiting satellites. His oceanographic research platform was a railroad bridge which spans the Cape Cod Canal. The goal-precise measurements-to evaluate analytical predictions and empirically develop better models for prediction.

"Doc" Ewen, a member of several IEEE professional groups, was a Fellow of the IEEE, the American Association for the Advancement of Sciences, and the American Academy of Arts and Sciences.

"Doc" was a family man. He traveled infrequently and thoroughly enjoys the company of several close friends and colleagues in the many diverse disciplines that have stimulated his interests over the years. Mrs. Ewen, the former Mary Ann Whitney, and he resided in Weston, Massachusetts, with their six boys and two girls, ranging in age from 7 months to 13 years.

Retrieved from "https://ethw.org/w/index.php?title=Harold_I._Ewen&oldid=172372"
Categories:
This page was last edited on 8 January 2019, at 20:17.
About ETHW
Policies and disclaimers