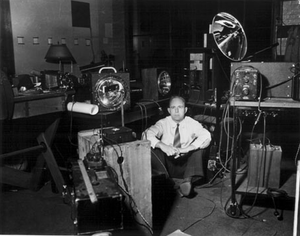 Harold “Doc” Edgerton was a pioneer in science and photography. His combination of art and technology straddled both worlds during the twentieth century. During his long, illustrious career he photographed athletes frozen in mid-air, the beaches of Normandy before the D-Day invasion and pictures of the sea floor in the Mediterranean Sea and Lake Titicaca with Jacques Cousteau. His developments of the strobe light and electronic flash were originally designed to study rapidly moving electric motors but his images became popular in the popular press and the art world. Edgerton’s well-developed sense of composition and color prevented the images from appearing as sterile laboratory experiments.

Harold “Doc” Edgerton was born April 6, 1903 in Fremont, Nebraska. He spent a lot time as a teenager tinkering around with all kinds of electric gadgets in the family garage. With his father’s help he got a part time job at the local power company. He was assigned to the ‘line gang’ that repaired downed power lines and did general repairs. His idea for the electronic flash traces back to his work on the lines. He was deeply impressed by Nebraska’s heavy thunderstorms and noticed that the lightning flashes ‘froze’ the movements of his co-workers.

After high school Edgerton decided to attend the University of Nebraska where he received his BS in Electrical Engineering in 1925. He continued his studies at the Massachusetts Institute of Technology (MIT) as a research assistant. While at MIT he began using rapidly flashing lights to study rapidly spinning motors. In 1931 he had perfected the stroboscope. The rapidly flashing light source was adjustable and could make the subject appear to slow down, or ‘freeze’, or make it appear to rotate backwards. His invention of the strobe led him to the later invention of the electronic flash.

The invention of the strobe and electronic flash changed forever the way that people saw the world. It was capable of stopping a bullet in mid-flight, ‘freezing’ the wings of a hummingbird, or the motion of a young lady jumping rope. Edgerton said the strobe allows us, “to chop up time into little bits and freeze it so that it suits our needs and wishes.” His early units had a flash length less than 1/50,000th of a second. His later units could slice time into 10 nanoseconds, or ten billionths of a second. A human eye blinks at about 1/40th of a second.

Edgerton’s work gave the world electronic flash for cameras, slow motion photography, remote controlled deep-sea cameras and the ‘flying flashes’ used by the Allies during World War II to take nighttime aerial reconnaissance photographs. He combined the time stopping abilities of the strobe and electronic flash with a camera and his sense of color and composition to show glimpses of the world never before seen. He exhibited his works at The Royal Photographic Society of England (1934), the New York Museum of Modern Art (1937), and the Museum of Science in Boston (1965). He also won an Academy Award for a short film, Quicker than a Wink, in 1940. 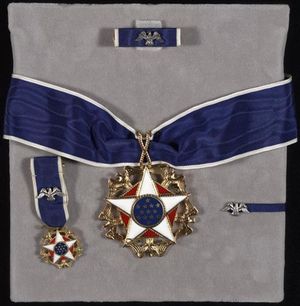 ‘Doc’ Edgerton accomplished much during his career. He was honored with the position of Institute Professor at MIT, one of a few so honored. He received the Medal of Freedom from the United States War Department for his work in the nighttime photo reconnaissance that was used to plan the D-Day invasion of Normandy. He was also a co-founder of EG&G (formerly Edgerton, Germeshausen, and Grier) along with two former students. After the war the company designed and operated photographic systems for analyzing nuclear bomb tests.

In the early 1950s Edgerton formed a long and eventful association with French underwater explorer Jacques Cousteau. Edgerton and Cousteau melded EG&G technology and Cousteau’s knowledge of the oceans to explore the Mediterranean Sea, the Pacific Ocean, Lake Titicaca in Peru, and the Atlantic Ocean off Puerto Rico. In 1973 Edgerton along with scientific colleagues discovered the USS Monitor, a Civil War ironclad lost in 1862, off of Cape Hatteras, North Carolina.

‘Doc’ Edgerton became a full professor at MIT in 1948. He was named Institute Professor Emeritus in 1966. He remained active at MIT until his death in 1990 at the age of 86.

Retrieved from "https://ethw.org/w/index.php?title=Harold_E._Edgerton&oldid=186757"
Categories:
This page was last edited on 30 November 2021, at 17:56.
About ETHW
Policies and disclaimers