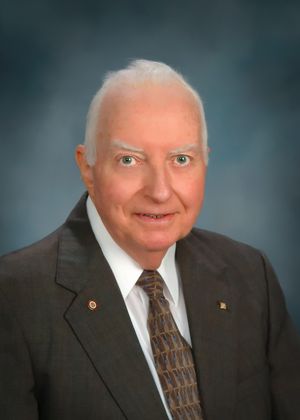 For nearly 50 years, Mr. George W. Younkin has been an industry leader in designing and producing machine tool systems.

He is best-known for the design of the Giddings and Lewis Numeripoint system, the first commercial numerical control (NC) system for the machine tool industry, for which he holds the patent. During his long career, he has designed and produced many machine tool systems incorporating NC controllers and spindle and feed servo drives. He was among the first to apply timing belts to servo drive gearing applications, allowing for more economical ratios with less backlash– an important aspect of manufacturing countless products in common, everyday use.

Mr. Younkin has consistently been ahead of the curve in introducing NC systems technology in manufacturing. He was the first to create a battery of tests for high-performance brushless drives and one of the first to place digital servos on a production machine when the industry transitioned from analog to digital technology. As a senior research engineer at Giddings and Lewis Machine Tool Company in Fond du Lac, Wisconsin, he was regarded as a source of inspiration for industry designers, providing innumerable solutions to take machine tool system performance to higher levels.

He has long been a technical and administrative leader in the IEEE, particularly in its Industry Applications Society (IAS). He was president of IAS and co-founded the IAS Industrial Drives Committee, chaired the IAS Machine Tools Committee and is a two-time chairman of the IAS Industrial Controls Committee. An IEEE Life Fellow, he has received an IEEE Standards Medallion, the IEEE IAS Distinguished Service Award and the IEEE Third Millennium Award.

Mr. Younkin is widely sought as a speaker and consultant on feedback control theory. He authored the definitive book, Industrial Servo Control Systems Fundamentals and Applications. He is currently a professional engineer at the Industrial Controls Consulting Division of Bull’s Eye Research, Inc. in Fond du Lac, Wisconsin.

Retrieved from "https://ethw.org/w/index.php?title=George_Younkin&oldid=145889"
Categories:
This page was last edited on 26 January 2016, at 16:51.
About ETHW
Policies and disclaimers