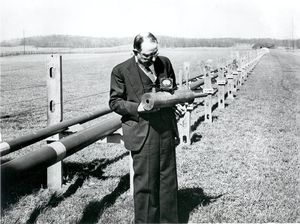 Southworth was born on 24 August 1890 in Little Cooley, Pennsylvania. He studied physics and received the B.S. degree from Grove City College in Pennsylvania, in 1914 before attending graduate school at both Columbia University in New York City and Yale University in New Haven, Connecticut. Before World War I, Southworth began experimental work at Grove City College, and during World War I continued with research work at the National Bureau of Standards and at Yale. He spent a year employed by the radio section of the National Bureau of Standards, and then in 1918, he became an instructor at Yale University's wartime radio school for the U.S. Signal Corps. He studied radio waves of very short wavelength at Yale, receiving the Ph.D. in 1923. That summer, he began his career with the Bell System, working for AT&T and specializing in the transmission of very high frequency (VHF) electromagnetic waves. He worked on transoceanic radio telephony and then the early development of microwave techniques.

It was for transmitting microwaves that Southworth developed waveguides in the 1930s. With transmission through the air, as in broadcasting, there is considerable wasted energy because the waves necessarily spread out from the transmitting antenna. With transmission through wires there are also significant losses, especially at the higher frequencies of microwaves. A waveguide, which is essentially a hollow metal pipe, channels the microwaves effectively and reduces transmission losses by a factor of five or so. Southworth's first message through one of his waveguides during a demonstration in July 1933 was "Send money" because AT&T management had not been very supportive of his project before then.

George Southworth's waveguides became very important in radar systems during World War II and microwave communications afterwards. For his work in waveguides, he received the [N. Liebmann Memorial Award] of the [of Radio Engineers] (IRE) in 1938 and the Stuart Ballantine Medal of the Franklin Institute, in 1947. He received the Louis Levy Medal of the Franklin Institute for his work on microwave radiation from the sun, in 1946. In 1963 the IEEE awarded him its Medal of Honor. He died on 6 July 1972 in Chatham, New Jersey.

Retrieved from "https://ethw.org/w/index.php?title=George_C._Southworth&oldid=196534"
Categories:
This page was last edited on 8 December 2022, at 21:50.
About ETHW
Policies and disclaimers