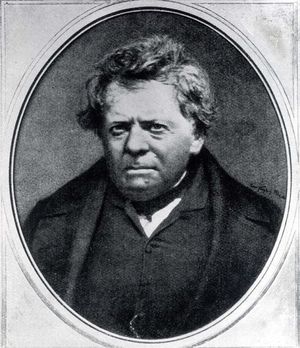 Georg Simon Ohm was born in 1789 and was a German Physicist who discovered that Voltage and Current are Directly Proportional, known as Ohm's Law.

Gerog was educated by his self-taught father to a high standard in mathematics, physics, chemistry, and philosophy. At 15 he studied at Erlangen University but he left after three semesters, having neglected his studies. He began teaching mathematics at a school in Switzerland in 1806 and became a private tutor in 1809. He returned to Erlangen University in 1811 and earned a doctorate, then began teaching there. In 1813 he continued teaching mathematics and physics at a school in Bamberg until accepting a position at a Jesuit gymnasium in Cologne in 1817 where he carried out physics experiments in their laboratory.

In 1825 he published his first paper examining the decrease in the electromagnetic force produced by a wire as the length increased, followed by two papers in 1826, and his famous book containing Ohm's Law in 1827, detailing his complete theory of electricity. "Die Galvanische Kette, Mathematisch Bearbeitet" (The Galvanic Circuit Investigated Mathematically), established that V=IR. The unit of resistance wasn't formalized until the 1860s, at it was established as the ohm (Ω) in his honor.

He resigned from teaching in 1828 and didn't resume in 1933 when he accepted a professorship at the Polytechnic School of Nuremberg. In 1849 he became curator of the Bavarian Academy’s physics cabinet at Munich, and in 1852 was appointed to the chair of physics at the University of Munich, which he held until his death.

Retrieved from "https://ethw.org/w/index.php?title=Georg_Simon_Ohm&oldid=178367"
Categories:
This page was last edited on 19 February 2020, at 17:48.
About ETHW
Policies and disclaimers