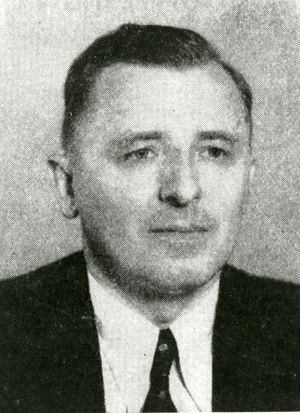 Georg Goubau (A'49-SM'56-F'57) was born in Munich, Germany, on November 29, 1906. He received the Dipl. Phys. degree in 1930, and the Dr. Ing. degree in 1931, both from the Munich Technical University. From 1931 to 1939, he was employed in research and teaching in the physics department of the same university. During this time he was principally concerned with ionospheric research. He established the first German Ionospheric Research Station (Herzogstaand/Kochel) and was in charge of research work there.

In 1930, Dr. Goubau became professor and director of the department of applied physics at the Friedrich-Schiller University in Jena, Germany. Since 1948, he has been a consultant at the Signal Corps Engineering Laboratories, Fort Monmouth, N. J.

Dr. Goubau is senior author of the volumes on electronics of the "FIAT Review of German Science," organized by the Military Government of Germany. He also is the senior author of a book on microwave circuits published in 1955 in Germany. In 1957, Dr. Goubau received the Harry Diamond Award of the IRE.

Retrieved from "https://ethw.org/w/index.php?title=Georg_Goubau&oldid=172097"
Categories:
This page was last edited on 21 December 2018, at 16:40.
About ETHW
Policies and disclaimers