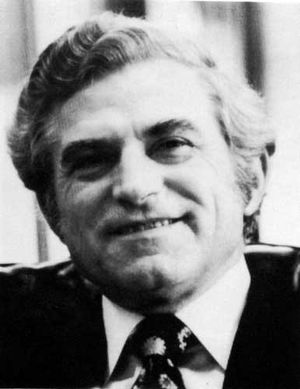 Gene M. Amdahl revolutionized the architecture and marketing of mainframe computers. Working at International Business Machines (IBM) in the 1950s, Amdahl spearheaded the development of the IBM 704 computer and the STRETCH supercomputer. He later served as director of IBM’s Advanced Computing Systems Laboratory and led the design of the IBM System/360 mainframe, the most profitable product line the company ever produced. In 1970, he founded Amdahl Corporation, which built Plug Compatible Mainframes that would run the same software as IBM computers. At Amdahl Corporation’s peak, these IBM-compatible mainframes captured over a fifth of the market. Amdahl left his eponymous company in 1980 to found three successive ventures: Trilogy Systems, Andor Systems, and Commercial Data Servers. In addition to his achievements in business and computer design, Amdahl is remembered for proposing “Amdahl’s Law” in 1967: If x of a program is inherently sequential, the maximum attainable speedup is 1/x.

Amdahl was born on a farm in Flandreau, South Dakota on November 16, 1922. He taught electronics in the United States Navy during World War II. In 1948, he received his B.S. in Engineering Physics from South Dakota State University. He then earned a Ph.D in Theoretical Physics from the University of Wisconsin in 1952. Although Amdahl came to Wisconsin to study physics, his side interest in designing computers attracted the attention of the university’s electrical engineering department. Encouraged to build a computer that could train graduate students in the rising field of digital computing, Amdahl designed the Wisconsin Integrally Synchronized Computer (WISC) in 1950 and submitted it as his doctoral thesis in June 1951. Written with lucidity and passion, Amdahl’s dissertation impressed IBM, which offered him a higher starting salary than any other new graduate in its history.

Amdahl’s first stint in his successful but contentious career at IBM was from 1952 to 1956. He began as the chief design engineer of the IBM 704, which was IBM’s first commercial product to use floating-point hardware and, uniquely, employed indexing and a high-level programming language (FORTRAN). Amdahl predicted that the IBM 704 would significant outsell the marketing department’s estimate of only six machines. He thought IBM would sell thirty-two, and, in fact, one hundred and forty units were sold.

He then worked on the initial design of the IBM 709 and STRETCH (IBM 7030). The STRETCH supercomputer, built for the Los Alamos National Laboratory, was projected to be one hundred times more powerful than any system on the market. Amdahl’s disagreements with management led him to leave the company while STRETCH was still in the planning process. He took positions at Ramo Wooldridge and Aeronutronic, where he designed computers that could help fighter planes win aerial dogfights.

Amdahl returned to IBM in 1960 and took a leading role in planning the company’s most innovative products. As the principal designer of the System/360 mainframe, Amdahl adapted technologies that emerged from the STRETCH project to build the most profitable product ever sold by IBM. These instruction-set compatible machines covered a 600:1 performance range, and their architecture is still part of many current IBM machines.

IBM recognized Amdahl’s contributions by naming him an IBM Fellow in 1969 and putting him in charge of the company’s Advanced Computing Systems Laboratory in Menlo Park, California. Amdahl again lost confidence in the company’s ability to overcome its internal performance barriers, particularly after IBM executives rejected his proposals for streamlining the corporation. He left the company in 1970 to form the Amdahl Corporation in Sunnyvale, California.

Amdahl’s new company planned its own line of mainframes that would be less expensive than IBM computers but run the same software. He essentially invented a product type: computer clones known as Plug Compatible Mainframes. Founded during a recession that worsened by the mid-1970s, Amdahl Corporation struggled to stay solvent and raise capital in a marketplace that doubted the wisdom of challenging such a dominant player. It took five years for Amdahl to ship its first computer, the Amdahl 470 V/6. Amdahl then entered an arms race with IBM, which had initially underestimated its new competitor, as each company sought to outdo the other with quicker, less costly, and more compact models.

Even as Amdahl Corporation emerged as a major threat to IBM’s bottom line by capturing over twenty percent of the mainframe market, its founder began to move away from his corporation. In 1980, he founded Trilogy Systems to build fault-tolerant wafer-scale chips. The designs, which would combine the functions of one hundred different chips into one superchip, proved feasible but excessively expensive to produce. In addition, Trilogy faced an unusual set of problems for a start-up. Torrential rains delayed the chip plant’s construction and destroyed the plant’s air conditioning, making it unsuitable for manufacturing. Having spent much of its start-up capital for nothing, Trilogy ended up acquiring Elxsi Corporation, a computer maker, to save itself. Elxsi, in turn, did not prosper, and Amdahl stepped down as its chairman in 1989.

Amdahl founded a third company, Andor systems, in 1987. Again, Amdahl’s goal was to compete with IBM, but this time, in the small mainframe market. His goal was to build a more efficient and cooler running model by using a central processor constructed on one board. IBM, by contrast, built its mainframes with several processors that generated significant heat, forcing buyers to house them in large, air-conditioned rooms to operate. But chip manufacturing problems continued to haunt his company. These delays gave IBM breathing room to create a similar product. Andor struggled to achieve profitability and declared bankruptcy in the mid-1990s.

In 1996, at age 74, entrepreneurial Amdahl started a fourth company, Commercial Data Servers (now known as Xbridge Systems). His goal was to develop computers with the power and capacity of traditional mainframes at the size of personal computers and network servers.

Amdahl has been recognized for his achievements with many awards, including the ACM/IEEE Eckert-Mauchly Award (1987) and the IEEE Computer Entrepreneur Award (1989). The mainframe magazine Computerworld described him as one of twenty-five people “who changed the world.”