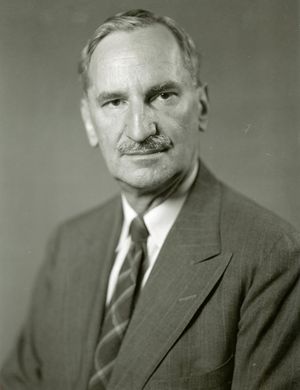 Dr. Francis B. Silsbee was born July 8, 1889 in Lawrence, Massachusetts. He received a Bachelor of Science degree in E.E. from Massachusetts Institute of Technology in 1910. In 1911 he received his M.S. also from M.I.T. and in 1915 he obtained J Ph.D. in Physics at Harvard.

Dr. Silsbee has acquired a high stature in the fields relating to instrument transformers, ignition apparatus and superconductivity.

He was first associated with the National Bureau of Standards in 1911 as assistant physicist and advanced to the rank of principal physicist, a position held until 1939 when he became chief of the Electrical Instruments section, 1939-1946. In 1916 he moved to chief of the Electricity Division where he remained until formal retirement in 1959. At that time, he assumed his present title of Consultant which he serves in a most distinguished and respected manner.

It is notable that Dr. Silbee's contributions started early in his career and have continued unabated. He published papers of importance beginning in 1913 and from then on very few years passed without one, two or even three noteworthy published articles. He has published a total of 61 papers, the last being published in 1962.

In particular his development of instrument transformer testing was outstanding and led to the Silsbee method widely used by utility companies. His paper published in 1913 entitled "Accuracy of the Formula for the Ratio, Regulation and Phase Angle of Transformers" has been often singled out as a milestone. His 1917 paper, "A Method for Testing Current Transformers" led to the manufacture of the Silsbee Current Transformer Set.

Dr. Silsbee headed the NBS Ignition Measurements Laboratory during World War I during which he fathered a series of reports and NBS scientific papers that made a great contribution to the understanding of the action of magnetos. He also did work on evaluation of the characteristics of electrical spark plugs.

His versatility took him into such useful fields as lightning hazards to aircraft. Superconductivity attracted his attention in 1917. It led him to a hypothesis, later verified and now known by his name, that the effect of electrical current on the critical temperature of a superconductor is caused by the magnetic field produced by the current.

As a result of his fine qualities and accomplishments, Dr. Silsbee has achieved many honors. He is a fellow of the Institute of Electrical and Electronics Engineers and of the American Physical Society. He is a member of the American Association for the Advancement of Science. He is a member and past president of the Philosophical Society of Washington (1936) and also the Washington Academy of Sciences (1950). He received the U.S. Naval Bureau of Ordinance Exceptional award, a citation for exceptional services in developing Naval ordnance equipment. On February 14, 1956, he received a U. S. Department of Commerce Exceptional Service award for outstanding service to the Nation. His reputation and his attainments go far beyond national boundaries.

Dr. Silsbee's works are impressive as foundation material in the profession, but of greater importance is his ability to communicate with clarity, simplicity and technical accuracy to those who come in contact with him. Also, a very important aspect of his career has been his interpretive or tutorial capabilities.

Dr. Silsbee's visitors are Accorded the facilities of the Bureau in such a generous and sympathetic way that they not only gain much of direct value, but come away with a feeling of warmth and respect for the work done there. It can truthfully be said that in the field of electric and magnetic units and their fundamental measurement, Dr. Silsbee has no peers.

Retrieved from "https://ethw.org/w/index.php?title=Francis_B._Silsbee&oldid=172322"
Categories:
This page was last edited on 7 January 2019, at 16:31.
About ETHW
Policies and disclaimers