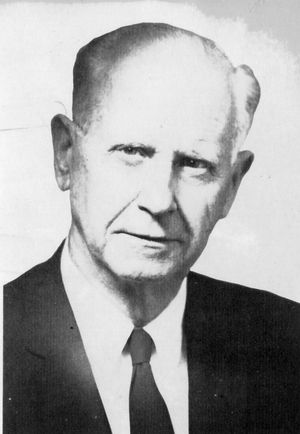 Forest K. Harris was born on August 26, 1902 in Gibson County, Indiana. One day in May 1917, a 14 year old boy in Weatherford, Oklahoma tucked his high school diploma under his arm and dreamed of summer and his entrance to Oklahoma University. The parents of Forest Harris shared this dream but their time-table differed. Instead, he would enroll in a nearby Normal school where, in the words of his father, "He can mature a little more before exposure to campus life at a big university."

By fall 1918, after earning a teaching certificate and surviving the hazards of practice teaching to playmates, he entered the school of Electrical Engineering at Oklahoma University. He later transferred to the Physics department, receiving his B.A. in Physics in 1921 and his M.S. in 1923. He was, also, an instructor in physics from 1921-1923 teaching, among others, a course in electrical measurements, a field in which he was to become a recognized authority.

During these student days the National Bureau of Standards began to govern the direction of his professional career. NBS publications in the school library aroused his interest, particularly those on optics and electricity. On the advice of Dr. H. L. Dodge, Head of the Physics Department, and through his personal contact with Dr. F. C. Brown, assistant director of NBS, Harris joined the staff at NBS as a Research Fellow in the Colorimetry Section, to obtain, in the words of Dr. Dodge, "two years of invaluable laboratory experience before pursuing his doctorate."

To quote Harris, "as the end of the 2-year period approached and preparations began for entering Minnesota University, thoughts of those cold winters made that northern spot seem even colder; this in contrast to the challenges and opportunities at NBS brought a change of mind. An appointment in the Electricity Division settled matters. His association with the Electricity Division continued from 1925, except for periods during two wars when he was assigned to special teams on defense problems. In 1932 he obtained his Ph.D in Physics from Johns Hopkins while working full time at NBS.

During his career, Dr. Harris concentrated on precise electrical measurements but the breadth of his contribution extends from the design of a transfer standard voltmeter to the development of an automatic bomb release, adapting gyroscopes as computer elements; and, from the design of a unique galvanometer for seismological applications to the development of electrical methods for diamond ide drilling. As Chief of the Absolute Measurements Section, he directed programs on the absolute measure of electrical quantities.

He was Adjunct professor at George Washington University where he taught Electrical Measurements for 30 years. His text-book "Electrical Measurements" evolved from those lectures and earned him Commerce Department's Silver Medal for outstanding authorship. Dr. Harris' active participation in IEEE and ANSI committees led to the NBS Rosa Award. Travels on scientific missions have taken him to most major countries. Although officially retired in 1971, he was working on an absolute volt experiment.

Dr. Harris was a Fellow of IEEE and of the Washington Academy of Sciences, and was a member of Phi Beta Kappa, Sigma Xi, Sigma Tau and the Cosmos Club. He relaxed with music, books and parties; played with granddaughters.; discussed medicine with his doctor son; and, quarterbacked pro games from strategic spots in front of the T.V.

Retrieved from "https://ethw.org/w/index.php?title=Forest_K._Harris&oldid=172601"
Categories:
This page was last edited on 18 January 2019, at 14:45.
About ETHW
Policies and disclaimers