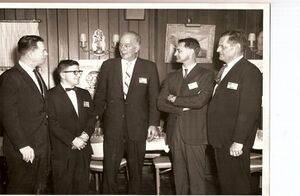 ICS leadership team shown in the picture which includes the General from the NSA (National Security Agency) and the Associate Director of Communications, CIA 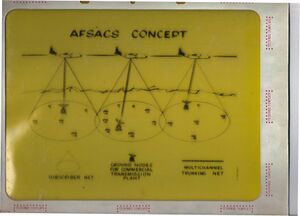 The world was at the brink of global disaster early 1960’s as the Cold War between the United States and Soviet Union had thousands operational and nuclear bomb armed intercontinental missiles (ICBM’s) in place targeting cities and military installations in each other’s country. If either country initiated a first launch of a single such ICBM, it would have triggered a massive launch by both countries against each other leading to a potential destruction of the world as we knew it. Multiple nuclear bomb detonations on both sides of the Atlantic Ocean were predicted to create a massive radiation laden soot blanketing the upper atmosphere blocking sunlight from reaching the earth . This would have cooled the earth’s surface sufficiently to create a dark year round global winter where freezing all living things likely extinguishing all living matter on earth.

President John F. Kennedy was extremely concerned about this possibility and therefore wanted to prepare the country for such possibility and constitute America’s military capability to quickly and totally destroy the Soviet Union and letting the soviets know of such plan with the objective of deterring any launch by the Soviets. To create such emergency national reaction/defensive posture, President Kenney ordered the creation of a special team assigned to create the plan and have it “shelf ready” for instant activation should it ever actually be needed. The team of about 100 very senior scientists from government agencies and selected private defense contractor companies including Bell Laboratories, Hughes Aircraft, RCA Communications was assembled as a “Think Tank” type operation at a single secure location about 1961. It was called ICS. The team was led by a general reassigned from National Security while Gunther reported to a reassigned senior member of the CIA. Gunther Karger was asked to join as the group’s communication specialist resulting from Gunther being on the project that developed the world’s first communication satellite (1960) and then served as Chairman of the Northern New Jersey Communications Group of the Institute of Electrical and Electronics Engineers(IEEE) which then as it remains today, was the world’s largest professional technical society. The group was constituted within the Air Force, reporting to the Secretary of Defense(then Robert McNamara) and the White House Office of National Security.

The assignment of this team was to create a national communication network capable of surviving an initial nuclear attack which as a result of the “EMP(Electromagnetic Pulse Effect” would destroy all electronic circuits rendering most of the then in place communications useless. A second assignment was to provide the Commander in the Airborne Command Post flying in an aircraft far from Washington the capability of sending the ‘GO” order to the submerged Atlantic submarine Fleet. The National Commander, an Air Force General, would then have the capability to order the entire fleet to launch its Polaris submarine based missiles (later the Tridents) and totally destroy the Soviet Union. The work of Gunther Karger and the ISC team also materially contributed to the resolution f the Crisis because Gunther and his team provided the Soviets credible information convincing the Soviet union not to risk a nuclear confrontation with the United States which eventually led to the policy of Détente that caused both sides to refrain from starting a war in fear of massive retaliation. Gunther, the youngest member of that team(age 29) conceived the systems which was capable of doing that job. He created the plan of deploying five C-130 aircraft flying in circular orbits at 25,000 ft. altitude carrying a radio transponder that provided communications on the ground over five 500 mile radius areas thus covering most of the United States coast to coast. He called the system AFSACS (Air Force Survivable Airborne Communication System) consisting of a network with a 3 KC(kilocycle) capability (compared with today’s MB(megacycle networks). Each assigned recovery “operator” would be assigned a unique code which could be called up by any other operator across the country, just like today’s cellular networks. It was entirely digital using speech compression techniques (then developed by the U.S. Army Signal Corps Development Labs at Ft. Huachuca, Arizona) meaning that only the intelligence part of the speech content would be transmitted and reconstituted at the receiving end by the receiving device. This would be somewhat like today’s secure intelligence “burst” transmission system used by covert operators (spies) on location in unfriendly countries. This handled the recovery capability.

Gunther personally presented the proposal for his system to the Pentagon senior staff using a viewgraph that could be projected to a screen depicting the system. Gunther preserved that viewgraph (attached) which has become part of this exhibit. Noteworthy is that the AFSACS conceived by Gunther about 1962 in actuality became the World’s first “cellular communication Network” preceding the Ericsson demonstration initial network unveiled in Stockholm, Sweden 1985, twenty years later.

The system Gunther conceived providing the airborne national commander the capability to send the “Go Order’ to the submarine fleet consisted of a radio signal from the ABNCP (Airborne National Command Post) to a highly secure and nuclear hardened underground facility with the capability of transmitting the signal to the submarines via ELF (Extreme Low Frequency) radio which is capable of penetrating the ocean salt water enough to reach a submerged antenna attached to the submarine. This requirement was essential to allow the submarine receiving the “Go Order’ while remaining submerged. For this work and his leadership on the Apollo Moon Program, Gunther was designated ‘Outstanding Man of America” by the JACEES (Junior Chamber of Commerce). The most noteworthy of remembrance though is that this was an accomplishment by a Holocaust Survivor whose entire family was murdered by the Nazis, sent away as an orphan at age six and raised via four foster homes and one orphanage. He arrived to America’s South(Pensacola, Florida) 1946 at age 13 to a foster home. Was educated at LSU in engineering and science, contributed to America’s Apollo Moon program while living with Shirley at Cape Canaveral. Florida and lived in Florida ever since. He with the constant help of Shirley, his wife, made a significant contribution to ‘Jewish Southern Experience”.

Retrieved from "https://ethw.org/w/index.php?title=First-Hand:Gunther_Karger%27s_Role_in_National_Security_Pioneer_Developing_the_World%27s_First_Cellular_Communications_Network&oldid=193430"
This page was last edited on 6 July 2022, at 18:49.
About ETHW
Policies and disclaimers