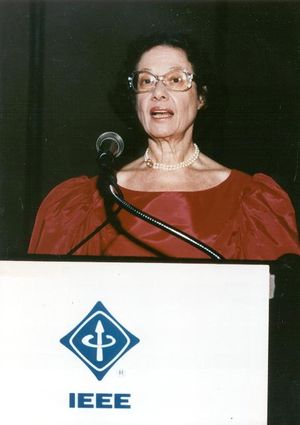 Most of Conwell's professional career was spent doing research in industry. After a year at AT&T Bell Labs, 1951-52, she joined GTE Laboratories (initially Sylvania) in 1952. Her work at Bell Labs and GTE consisted mainly of fundamental studies on properties of semiconductors, especially transport. In 1972, she left GTE to join Xerox Webster Research Center (now the J.C. Wilson Center for Technology) where she was currently a Research Fellow. Her work at Xerox focused mainly on properties of organic conductors, which are important components of xerographic copiers and printers. Conwell's career also included teaching at Brooklyn College (1946-51), a year as a Visiting Professor at the University of Rochester, Dept. of Chemistry, and as an Associate Director of the NSF Center for Photoinduced Charge Transfer at that University since 1991. In June 1998, she retired from Xerox to join the Chemistry Department faculty at the University of Rochester.

While Conwell was working on her M.S. degree, the physics and engineering communities were beginning to study germanium and silicon. These studies would, within a few years, lead to the invention of the transistor. Her research, with Prof. Victor Weisskopf, gave a description of how impurities affect the transport of electrons in a semiconductor and, thus, their essential role in transistor and other semiconductor device operation. During her year at Bell Labs, she began what would be years of work on the effect of high electric fields on electron transport in semiconductors. Electric fields feed energy into the electrons, high fields causing them to become "hot" and changing their motion in ways that affect device operation. This work culminated in her textbook on High Field Transport in Semiconductors, which has become a basic text in the field. At Xerox, she investigated transport and optical properties of doped polymers such as those used for photoreceptors in copiers. She has also been studying properties of conducting polymers. These are unique, quasi one-dimensional semiconductors, which show promise for LEDs, photovoltaic devices and field effect transistors, the latter having been shown comparable in properties to amorphous silicon transistors.

Conwell was a Life Fellow of the IEEE and of the American Physical Society. She was elected to the National Academy of engineering (1980), National Academy of Sciences (1990) and the American Academy of Arts and Sciences (1992). In 2010 President Barack Obama awarded Dr. Conwell the National Medal of Science. She holds 4 patents and has published over 200 papers. Other recognitions include the Achievement Award of the Society of Women Engineers, Discover Magazine's 50 Most Important Women in Science, and an Honorary D.Sc. from Brooklyn College. She is the 1997 recipient of the IEEE Edison Medal "For fundamental contributions to transport theory in semiconductor and organic conductors, and their application to the semiconductor, electronic copying and printing industries." She is the first woman to receive a major IEEE Medal.

Conwell and her husband Abraham Rothberg, lived in New York. Their son, Lewis Rothberg, is a Professor at the University of Rochester. Apart from technical work she was devoted to ballet, taking several classes a week.

Retrieved from "https://ethw.org/w/index.php?title=Esther_Conwell&oldid=158479"
Categories:
This page was last edited on 26 January 2018, at 17:32.
About ETHW
Policies and disclaimers