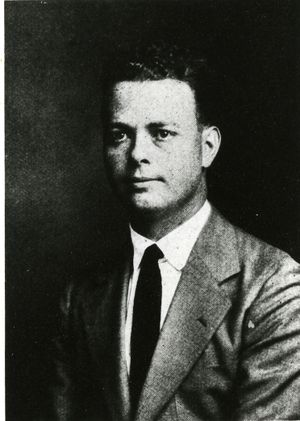 Edmond Bruce was best known for his inventions of the rhombic antenna and Bruce Array. He was born on September 28, 1899 in St. Louis. Bruce left high school in 1917 to join the US Navy, where he eventually served as chief radio electrician in the transatlantic communication service.

After leaving the Navy in 1919, Bruce went on to attend George Washington University, where he remained for only one year. He left George Washington to attend the Massachusetts Institute of Technology. Between 1921 and 1923, Bruce worked at the Clapp-Eastham Company while pursuing his studies. He graduated from MIT in 1924 with a bachelor's degree in electrical communication.

Bruce joined the Western Electric Company in 1924, and joined Bell Telephone Laboratories one year later as a research engineer. During his career at Bell Labs, Bruce worked to develop radio receivers, directional antennas, and field strength measuring equipment. In 1931, he invented the rhombic antenna with Harald Friis. This device is a broadband directional antenna used mostly in high-frequency or shortwave ranges. That same year Karl Jansky, an American physicist and radio engineer, used the Bruce Array, another directional antenna that Bruce developed,in his early radio astronomy experiments. Bruce's pioneering work with the development of directive antennas earned him the 1932 Morris N. Liebmann Memorial Award and the Franklin Institute's 1935 Longstreth Award.

Retrieved from "https://ethw.org/w/index.php?title=Edmond_Bruce&oldid=177977"
Categories:
This page was last edited on 4 December 2019, at 18:10.
About ETHW
Policies and disclaimers