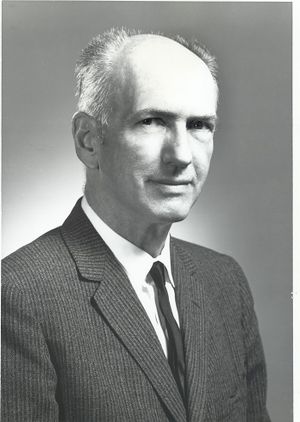 David M. Kerns is a native of Minnesota and received his Bachelor's Degree in Electrical Engineering from the University of Minnesota in 1935. This was followed by graduate work in physics and mathematics at the University of Minnesota, where he held teaching and research assistantships; by employment as a physicist in the Air Materiel Command, Wright Field, Dayton, Ohio; and by service in the U.S. Army Signal Corps with principal tour of duty at the wartime Massachusetts Institute of Technology Radiation Laboratory. He joined the U.S. National Bureau of Standards in 1946, and subsequently resumed his graduate studies, receiving his Doctorate in Physics from Catholic University, Washington, D.C., in 1951.

Although Dr. Kerns has served in a variety of administrative and staff capacities, he has been primarily interested in theoretical work in support of measurements and standards. He contributed to the theory and analysis involved in the development of new techniques for the measurement of microwave power and microwave reflection coefficients, which have been adopted by NBS and others. A large fraction of his work has been in the electromagnetic theory of waveguides, and waveguide junctions (or N-ports), with some emphasis on the matrix description of such N-ports. More recently he has been developing and applying a scattering-matrix theory of antennas and antenna-antenna interactions together with the corresponding theory for electroacoustic transducers. The new antenna theory provided the basis for the development of major new antenna measurement facilities at NBS and elsewhere; the acoustics version is currently being implemented in NBS.

Dr. Kerns has contributed significantly to the research literature in the areas mentioned. He is, with Dr. R. W. Beatty, coauthor of the book, "Basic Theory of Waveguide Junctions and Introductory Microwave Network Analysis."

Dr. Kerns received the Silver Medal of the U.S. Department of Commerce in 1960, the Gold Medal in 1973. He was elected to membership in Sigma Xi, Tau Beta Pi, and Eta Kappa Nu.

Among other non-work interests, Dr. Kerns has particularly enjoyed amateur radio, sailing, and ice-skating in Minnesota; hiking and camping in the Blue Ridge and other eastern mountains; and hiking, skiing, ski-mountaineering and photography in the Colorado Rockies.

Dr. Kerns was a Senior Research Scientist in the Electromagnetics Division of NBS, in Boulder, Colorado. He has been a Professor-Adjoint in Electrical Engineering in the University of Colorado since 1961.