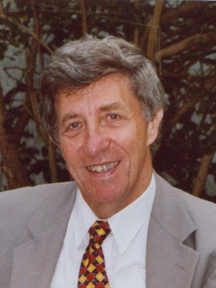 Bryan Kibble has reshaped the SI system through his determinations and definitions of the ampere, volt, ohm and kilogram, and his principles have become the established methods for generations of metrologists who have followed him. Dr. Kibble measured the gyromagnetic ratio of the proton, which improved the realization of the SI definition of the ampere. This work was significant in uncovering a substantial error in the traditional realization of the ampere with current balances.

Subsequently, his best-known work involved the development of what would become known as the “watt balance” and resulted in worldwide acceptance of the Josephson and von Klitzing constants to represent the conventional values of the volt and ohm. Prior to this, major industrialized nations had different representations for these units, presenting a trade barrier to the sale of electrical measuring instruments. Watt balances are now playing a role in redefining the kilogram.

Retrieved from "https://ethw.org/w/index.php?title=Bryan_P._Kibble&oldid=145404"
Categories:
This page was last edited on 19 January 2016, at 19:33.
About ETHW
Policies and disclaimers