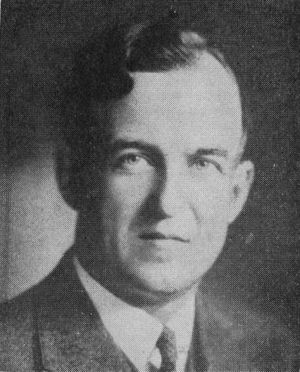 Ashton B. Cooper was born in Bloomfield, Ontario, on December 31, 1883. After finishing at the local public grade schools he attended the Somerville Latin School at Somerville, Massachusetts, graduating subsequently from Tufts College in 1903 with the degree of B. S. in Ε. E.

After graduation Mr. Cooper spent two years in the General Electric Test Course at Schenectady. In 1906 he became Inspector for Dr. F. S. Pearson and was located at East Pittsburg in connection with the generating plant equipment then being manufactured by the Westinghouse Electric & Manufacturing Company for the Rio de Janeiro Tramway Light & Power Company. He was subsequently in Brazil for a year in connection with the installation of the same equipment.

In 1922 he was appointed General Manager of Ferranti Electric Limited at Toronto.

Mr. Cooper joined the AIEE as a Member in 1916, taking an active interest in the Toronto Section, of which he was Chairman in 1919-20. He was Vice-President of the Institute for District No. 10 for the term 1927-29, and has served as a member of the Lighting and Illumination, Membership, and Electrical Machinery committees. He served as director of the AIEE Canadian Region from 1930-34.

Retrieved from "https://ethw.org/w/index.php?title=Ashton_B._Cooper&oldid=178697"
Categories:
This page was last edited on 2 March 2020, at 20:11.
About ETHW
Policies and disclaimers