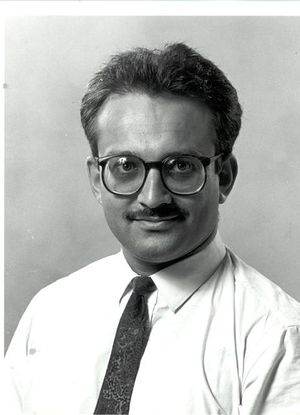 Asad A. Abidi, professor of electrical engineering at the University of California, Los Angeles, is a pioneer in the field of radio-frequency complementary- metal–oxide–semiconductor (RF) CMOS technology. His research, which drove the integration of baseband processing and RF technologies into traditional digital CMOS integrated circuits, has had a significant influence on communications technologies. While as recently as 15 years ago the idea of RF-CMOS was not considered a viable solution for sensitive wireless applications, it has since been embraced by a number of leading semiconductor companies including Texas Instruments, Broadcom and Atheros. RF-CMOS is currently incorporated into nearly all commercial Bluetooth and wireless networking products, and is making inroads into the new generation of systems-on-a-chip for mobile telephones. An IEEE Fellow, Dr. Abidi has received numerous awards and honors, including induction into the U.S. National Academy of Engineering, the IEEE Millennium Medal and the IEEE Donald G. Fink Prize Award.