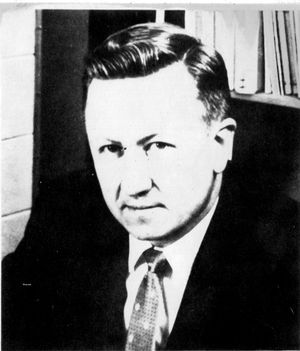 Arthur H. Guenther was born in Hoboken, New Jersey in 1931. He received the B.S. degree in Chemistry from Rutgers University in 1953. After serving as a graduate assistant an research fellow, he received the Ph.D. degree Chemistry-Physics from Pennsylvania State University, in 1957, under Dr. David H. Rank.

Since 1963, Dr. Guenther has developed a laser-triggered switching system and has published more than sixty technical papers in scientific journals throughout the world on that specific subject as well as on lasers, optics, high-voltage technology, nuclear weapons effects simulation, and on the hydrodynamic response of materials. He has an international reputation as an expert in nuclear detonation effects, in high-voltage, high-peak power sources, and in optics.

His inventions such as the laser-triggered switch (1963) and his broad experimental ingenuity have made it possible for the Air Force to artificially create many of the effects of nuclear detonations and to use these techniques to evaluate the survivability and vulnerability of various Air Force systems and to employ such data to protect aircraft and missiles from enemy nuclear attack.

He was Adjunct Professor of Physics at the Air Force Institute of Technology and Adjunct Professor in the Department of Electrical Engineering at Texas Tech University. He presently serves as Chairman of the Optically Pumped Laser Section of the American Society for Testing Materials.

More than any other person, Dr. Guenther has contributed most to the growth of modern Kirtland Air Force Base scientific laboratories and to the steadily expanding research and development efforts of the Special Weapons Center and the Weapons Laboratory.

Dr. Guenther's awards include three Outstanding Performance Ratings (1964, 1965, & 1970); twice selected as one of the twenty semi-finalists for the Arthur S. Flemming Award honoring the ten outstanding young men in the Federal Government (1968 and 1969) ; and two commendation letters to accompany the award of IAF Outstanding Unit Award to the AF Weapons Laboratory (7 Oct. 1965 and 10 Feb. 1967).

Dr. Guenther was a member of the American Chemical Society, Optical Society of America, Phi Lambda Upsilon, Sigma Psi, the New Mexico Academy of Science, and a Senior Member of the IEEE.