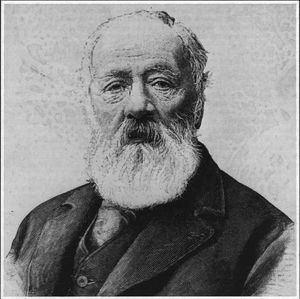 Antonio Meucci was born in Florence, Italy to Amatis Meucci and Domenica Pepi, in 1808. From an early age he showed an interest in technical matters. A few years after completing his schooling, he became chief engineer at the Florence's most important theater. The tense political situation in Italy at the time was a factor in Meucci's acceptance of an offer to become chief engineer at a large theater in Havana, and in 1835 he and his wife emigrated to Cuba. For 15 years Meucci thrived in Havana. In addition to his main job, he set up an electroplating business and did a great deal of experimenting on his own.

He became particularly interested in medical uses of electricity, and it was in 1849 while administering shock treatment to a patient that he first conceived of using electricity and wires to convey speech. In one of his experiments with electric shock, the patient, who had one electrode in his mouth, cried out in pain. Meucci thought he heard the sound more clearly than usual. He then placed an electrode from the apparatus in his own ear, and thus heard sound conveyed through wires. Meucci dubbed his discovery the speaking telegraph and continued to experiment, though he had difficulty reproducing the phenomenon.

When the theater in Havana, where Meucci worked, was destroyed by fire in 1850, Meucci and his wife moved to New York City. There he could continue his enginering work with the Italian Opera community and quickly established himself within the Italian community in the city.  Meucci lived mostly in a world of his countrymen, establishing relationships with Italian political exiles, and never fully learning English.  In the early 1850s, he shared a home on Staten Island with Giuseppe Garibaldi, a leader of the Italian independence fight and opera tenor Lorenzo Salvi.  Meucci set up his laboratory in the basement and remained in the home with his wife for the rest of their lives.

After a failed sausage and salami factory enterprise, Meucci developed a formula for the manufacture parafin candles, which would later be patented.  This enterprise too struggled, as did his attempts to construct pianos and produce beer.  His real interest continued to lie with experimentation and inventing.  His inventions and discoveries were varied, ranging from oil treatments for paint, an oil lamp without a glass chimney, a screw steamer for canals, and effervescent temperance drinks.  Perhaps his most potentially lucrative invention, besides the talking telegraph was a process for making paper from wood fiber.  Meucci was never able to successfully capitalize on his inventions, however, often outmaneuvered by business associates.

From the mid 1850s to the early 1860s, his financial situation deteriorated, reducing him to poverty. A serious injury resulting from a boiler explosion aboard a Staten Island ferry boat confined Meucii to bed for three months.  His wife, desperate for money and often suspicious of his experimenting, sold all of Meucci’s electrical apparatus in 1871.

In about 1854 Meucci's wife's rheumatoid arthritis became so severe that she could seldom leave her bedroom on the third floor of the house. This prompted Meucci to resume work on his speaking telegraph, and by 1861 he had built a mechanical telephone connection between the bedroom and his two laboratories, one in the basement and one behind the house. 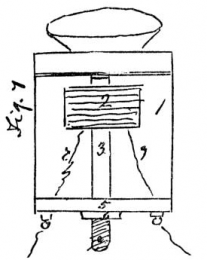 Meucci made some efforts to gain the interest of investors in his speaking telegraph invention, but without success. Nevertheless, over the years that followed he worked from time to time on his telephone and on other inventions.

In December 1871 Meucci formed a partnership with three others to promote the telephone invention. They engaged a lawyer to prepare a patent application, but the partners did not provide the $250 fee, so all that was prepared was a caveat, which cost $20. The lawyer, who did not understand the invention, prepared the caveat hastily and did not include any drawings. The partnership soon dissolved: one partner withdrew, another returned to Italy, and the third died. Meucci was able to find the required $10 to renew his caveat in December 1872, and he did so again the following year. But he did not have the funds to renew it a third time, so the caveat expired. It was just a year later, in early 1876, that Alexander Graham Bell filed his first telephone patent, and a patent examiner later said that had Meucci's caveat been renewed, no patent would have been issued to Bell.

When Bell's telephone became known, Meucci made efforts to prove his priority. In 1883 he assigned the rights to his invention to a group working to overturn the Bell patents. This group was not successful in the courts.

On 18 October 1889 Meucci died.  Although he did not succeed in gaining recognition for his telephone invention in his lifetime, he did receive five patents in other areas, including hygrometry and effervescent drinks.

On the hundredth anniversary of his death, two books on Meucci were published in Italy, and in 1990 a square in Brooklyn was named after him. The Meucci home on Staten Island is today maintained as a museum, the Garibaldi-Meucci Museum, by the Order of the Sons of Italy in America.

Catania Basilio 2002 Antonio Meucci una vita per la scienza e per l'Italia, 2 volumes. (in Italian) This is perhaps the most extensive resource on Meucci.  Catania Basilio has also written and spoken on Meucci in English, including his work:  "Antonio Meucci: Telephone Pioneer. Bulletin of Science, Technology & Society, Vol. 21, No. 1, February 2001, 56-77.  A substantial list of his work can be accessed here.

Aitken, W. Who Invented the Telephone? (London and Glasgow: Blackie and Son), 1939.

Retrieved from "https://ethw.org/w/index.php?title=Antonio_Meucci&oldid=145285"
Categories:
This page was last edited on 18 January 2016, at 17:18.
About ETHW
Policies and disclaimers