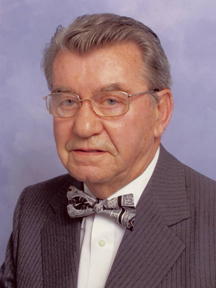 Antal K. Bejczy has made unique and fundamental contributions to the understanding and use of robotic human–machine interfaces, including novel and important enhancing roles of automation.

During his career at the Jet Propulsion Laboratory, he pioneered the development of several innovative robot components such as “smart hands” with “smart sensors” and a novel telerobotic system using a general-purpose force-reflecting hand controller for remote robot arm control that also serve the medical field. His work also led to the design of a precise microsurgical system and the development of the da Vinci surgical robot system by Intuitive Surgical, Inc., which offers less-invasive procedures. He was principal investigator of a flight experiment using a force-moment sensor enhanced “hand” on the space shuttle arm of the Space Shuttle Columbia in 1994 and holds 43 NASA innovation awards.

An IEEE Life Fellow, Dr. Bejczy is retired as a senior research scientist from JPL in 2001.

Retrieved from "https://ethw.org/w/index.php?title=Antal_C._Bejczy&oldid=145279"
Categories:
This page was last edited on 18 January 2016, at 16:59.
About ETHW
Policies and disclaimers