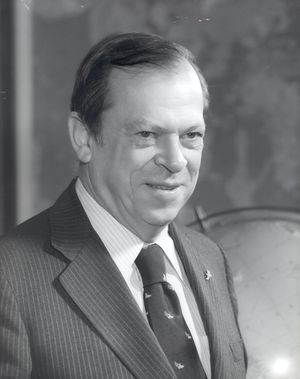 Dr. Allen E. Puckett was born July 25, 1919, in Springfield, Ohio. He received his B.S. degree in 1939 and M.S. degree in 1941 from Harvard University, and obtained his Ph.D. at California Institute of Technology in 1949. He has authored numerous technical papers on high-speed aerodynamics and co-authored the book, "Introduction to Aerodynamics of a Compressible Fluid," and was coeditor of the book, "Guided Missile Engineering."

He has served on numerous industry and government committees, including the Army Scientific Advisory Panel; the Defense Science Board (vice chairman 1962-1964); the U.S. Army Ballistic Research Laboratories' scientific advisory committee; NASA's subcommittee on automatic stabilization and control, Committee on Aerodynamics, and Space Program Advisory Council; and the Aerospace Industries Association (chairman in 1979).

Dr. Puckett was consultant to the operations evaluation group of the Chief of Naval Operations, and to the President's Scientific Advisory Committee. He also served as chairman of NASA's research advisory committee on control, guidance and navigation, and of the steering group for the Director of Defense Research and Engineering's mutual weapons development program.

He was a member of the National Academy of Engineering and National Academy of Sciences, a Fellow and past president of the American Institute of Aeronautics and Astronautics, and a member of Phi Beta Kappa and Sigma Xi. He was also a member of the corporation of the Charles Stark Draper Laboratory, Massachusetts Institute of Technology; and has served as Chairman of the Board of Counselors, School of Engineering, University of Southern California.

Among the honors presented to Dr. Puckett are the Institute of Aeronautical Sciences' Lawrence Sperry Award, the Lloyd V. Berkner Award from the American Astronautical Society, the USC School of Engineering Award for contributions to engineering management, and an award from Brandeis University for distinguished achievement in the field of technology.

Retrieved from "https://ethw.org/w/index.php?title=Allen_E._Puckett&oldid=172736"
Categories:
This page was last edited on 22 January 2019, at 15:43.
About ETHW
Policies and disclaimers