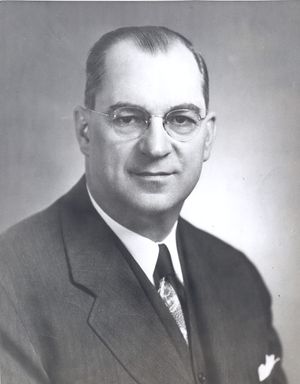 In 1962, Monteith was awarded the AIEE's Edison Medal 'For meritorious achievement in engineering, education, management, and development of young engineers.'

Alexander Crawford Monteith (AM '25, M '40, F '45), vice-president in charge of engineering and research, Westinghouse Electric Corporation, Pittsburgh, Pa., was AIEE president from 1954 to 1955. Born on April 10, 1902, in Brucefield, Ont., Canada, Dr. Monteith received his bachelor of science degree in electrical engineering from Queen's University in 1923. In 1948 he received an honorary degree of doctor of laws from Queen's University.

Dr. Monteith's 30 year engineering and business career began in 1923 when he joined Westinghouse at East Pittsburgh as a graduate student on the training program. The following year he was assigned to the central station engineering department, where he became an expert in power station auxiliaries, power system transmission, distribution, and related fields. For several years he acted as an engineering supervisor and consultant on power system problems to various utilities serving the central part of the United States. He became manager of the department in 1938. While holding this position he was awarded the Westinghouse Order of Merit in 1940. In 1941 he was named manager of the entire industry engineering department. In 1945 he assumed responsibility for the headquarters engineering departments of Westinghouse and became director of education as well. In this same year he was appointed secretary of the Westinghouse Educational Foundation. In 1948 he was elected to his present executive position as vice-president. He also became chairman of the Westinghouse Educational Foundation that year. Dr. Monteith is a member of The American Society of Mechanical Engineers and was elected an honorary member of that society in 1953. In addition he has served on several American Standards Association committees and is a member of the Engineers Society of Western Pennsylvania, the American Society for Engineering Education, the International Conference on Large Electric High-Tension Systems (CIGRE), and Tau Beta Pi. He was a charter member of the Engineering Manpower Commission. of Engineers Joint Council and has served in various functions with the Engineers' Council for Professional Development.

Retrieved from "https://ethw.org/w/index.php?title=Alexander_Monteith&oldid=145189"
Categories:
This page was last edited on 13 January 2016, at 17:59.
About ETHW
Policies and disclaimers