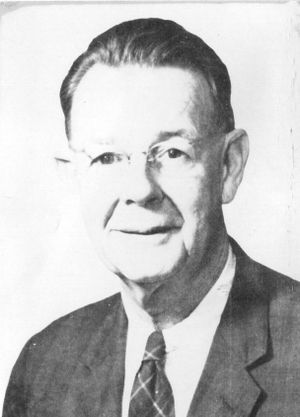 Albert James Williams, Jr., was born in Media, Pennsylvania and earned his B.A. in Electrical Engineering at Swarthmore College.

Summer work with a surveying party developed his early interest in precise measurements. After graduation he was employed by the Bell Telephone Laboratories where his work on audio coupling transformers resulted in the first of his 50 U. S. and foreign patents.

In 1927 he joined the Leeds & Northrup Company to begin a career of more than forty years of continuing contribution to the field of electrical measurements-first as a test and research engineer, eventually as an Associate Director of Research, and for the last dozen years as Science Advisor. The first twenty-five of those years were influenced by Morris E. Leeds himself. A member of L&N's development Advisory Committee from 1959 to his retirement in 1968, Mr. Williams was a consultant, with L&N among his clients.

Albert Williams has been as much concerned with the end-use of measurement as with its precision, accuracy and elegance. Accordingly, his patents range from special components and circuit arrangements to data recording, information display and control. Developments of microvolt-level amplifiers provided the basis for his 1948 prize paper award. Invention of the first electronic self-balancing recorder led to the 1952 Wetherill Medal from the Franklin Institute. His recent analog-decimal recording system records data of high precision in a condensed form, without sacrificing the analog format in which trends are most readily recognized by human observers.

Mr. Williams, a member of and an active contributor to his professional societies, was a Fellow of the IEEE. The significance of his numerous writings lies not in their quantity, however, but in the freshness of their viewpoint and tutorial value.

Albert Williams' originality of viewpoint, and his interest in comparing and sharpening his views against those of others, has been coupled with a delightfully approachable personality to the benefit of literally scores of friends and co-workers.

His normal desire for peace has not, however, deterred him from conflict when he believes his cause to be right, whether in business or at play, hence, his continuing struggle with the golfing "establishment" over his invention of a successful adjustable golf club. With other enthusiasts he helped found the One Club Golf Association. He also maintained an elaborate pocket-size data system to prove that use of his single club, adjusted as necessary to become driver, mid-iron or putter-has added no more than one or two strokes to his score.

Retrieved from "https://ethw.org/w/index.php?title=Albert_J._Williams,_Jr.&oldid=172363"
Categories:
This page was last edited on 8 January 2019, at 19:38.
About ETHW
Policies and disclaimers