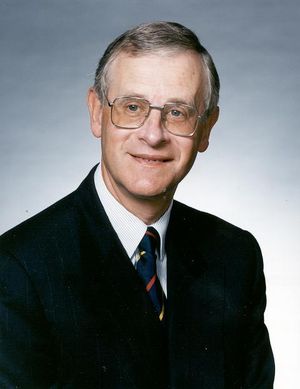 Twice honored by Her Majesty Queen Elizabeth II and former head of operations at British Telecommunications PIc, Alan Rudge is a living example of leadership in engineering.

Dr. Rudge, who helped lead the former monopoly from its early stages of privatization to today's global telecommunications power, joined BT as Director of Research and Technology in 1987. Armed with a mandate to restructure the company's research and development capabilities, he helped double the division's strength during a period of major downsizing.

Within a year, Dr. Rudge was appointed to the BT Group Management Board and in 1989 to the company's main board. As a board member, he represented BT with various affiliates, including MCI .In 1995 he was appointed Deputy Managing Director of BT and a year later assumed the post of Deputy Chief Executive. He retired in 1997.

His postdoctoral work, specializing in antennas and microwaves, was conducted at Illinois Institute of Technology Research Institute (IITRI) in Chicago. Returning to Birmingham, his research focused on the cross-polarization characteristics of reflector antennas.

Dr. Rudge founded the Radio Frequency Technology Centre, a joint venture between IITRI and the Electrical Research Association (ERA) in the U.K. ERA acquired the Centre and today; he is chairman of the association.

Since retiring from BT, Dr. Rudge has become chairman of W.S. Atkins, the Engineering Consultancy Group.

Besides serving on the British Government's Committee for Science and Technology and the Strategic Defense Review panel, he is chairman of both the Engineering and Physical Sciences Research Council and the Engineering Council.

A Fellow of the IEEE, he was awarded the IEE Faraday Medal in 1991 and was elected President of the IEE in 1993. He was elected to the Royal Academy of Engineering in 1984 and the Fellowship of the Royal Society in 1992.

Dr. Rudge was awarded the 1998 IEEE Founders Medal "For distinguished leadership in the field of telecommunications and for advancement of the electrical and electronic engineering profession."

Retrieved from "https://ethw.org/w/index.php?title=Alan_Rudge&oldid=145152"
Categories:
This page was last edited on 13 January 2016, at 16:04.
About ETHW
Policies and disclaimers