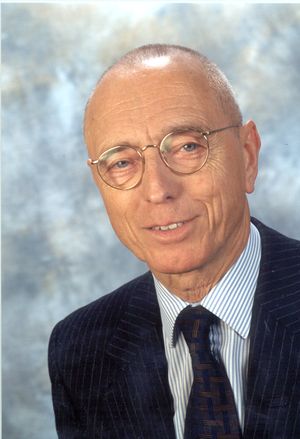 Adrianus de Hoop was born on December 24, 1927 in Rotterdam, Netherlands. He earned both his master's degree in electrical engineering (1950) and PhD in technological sciences (1958) from the Delft University of Technology. In 1950, he joined the faculty of Delft University as a professor of Electromagnetic Theory and Applied Mathematics, and since 1996 has been a Professor Emeritus in the university's Department of Electrical Engineering, Mathematics, and Computer Science. One of de Hoop's accomplishments at Delft University has been the creation of the Laboratory of Electromagnetic Research in 1970.

De Hoop is known for his research in wavefield modeling in acoustics, electromagnetics and elastodynamics. Early in his career, de Hoop was a research assistant at the Institute of Geophysics at the University of California, Los Angeles. During his year here, from 1956-1957, he modified the Cagniard method of calculating impulsive wave propagation. His modification, known as the Cagniard-de Hoop method, continues to be used for analysis of time-domain wave propagation.

De Hoop has received numerous awards and honors from the Royal Institute of Engineers, the International Scientific Radio Union, and the IEEE, among others. In 2001, he received the IEEE Heinrich Hertz Medal.

Retrieved from "https://ethw.org/w/index.php?title=Adrianus_de_Hoop&oldid=173305"
Categories:
This page was last edited on 1 February 2019, at 20:30.
About ETHW
Policies and disclaimers