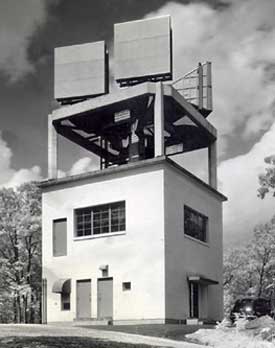 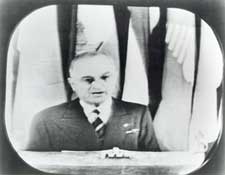 One of the first uses of wide-bandwidth microwave transmission after World War II was the transcontinental television network, which was constructed by AT&T in 1950. Television broadcasts, which had started in the late 1930s had been postponed because of World War II, but re-emerged at war’s end. Radio networks such as NBC, CBS, and ABC turned their attention to TV, and wanted to establish coast-to-coast television as quickly as possible. That way, they could collect programs broadcasted anywhere and send them out to their affiliate stations all around the continent.

Although it was possible to send television signals over long distances by coaxial cable, more TV channels could be carried by microwaves at a lower cost. Because microwaves travel in a straight line and do not follow the earth’s curvature, a microwave transmission system had to have repeater towers about every 48 kilometers (30 miles), following a “line of sight” from tower to tower. These repeater stations would also strengthen the signal and change the frequency for its next 48 kilometer “hop.” Changing the frequency prevents the incoming signal from interfering with the relayed signal at the next tower.

Work began in the 1930s with experimental microwave transmission systems covering short distances. By 1947, AT&T had set up a series of microwave towers between New York and Boston. By November of that same year they demonstrated telephone and television transmission over the system—showing the familiar “test pattern.” As of 1 May 1948, this new line was kept in continuous operation.

While AT&T was working on the New York-Boston network, the company was also planning a coast-to-coast microwave link. Code-named TD2, the initial line of the transcontinental system was built from New York to Chicago. A west coast line from San Francisco to Los Angeles was also underway, as was a link from Chicago to San Francisco.

Each station consisted of a small plot of land, on which was built a building and a steel tower for the antenna. The antenna itself was a pyramid-shaped, hollow steel structure about two and a half meters (about eight feet) on a side. Because of the nature of microwave transmission, the dimensions of the antenna had to be extremely accurate—it could have less than 1/8 of an inch variation on any side. The electronic equipment housed in the building included vacuum tube-type amplifiers for the microwave signals. In the eastern part of the country, it was easy to find hills on which to build the stations, so the towers could be short. In the flat Midwest, however, steel towers of about 38 meters (125 feet) or more had to be constructed.

Tests using the first “repeater” stations began in early 1950, and the entire system was functional by the end of September of that year. However, the first “official” transmission on the system—President Truman’s opening address at the Japanese Peace Treaty Conference in San Francisco in September 1951—came almost a year later.

The TD2 system was used exclusively until about 1955. After then AT&T began supplementing TD2 equipment with updated technology called TH1. Installed in the same places where the TD2 repeaters were located, the new TH1 system improved reliability. In 1962 the company began installing an even more efficient system called TD3.

This steady stream of improvements lowered costs, decreased noise and distortion, and improved reliability. For example, in the late 1940s microwave vacuum tubes in the experimental system were expected to last a mere 40 days, and most failed before that. The last generation of tubes introduced in 1973 could last a year before they burned out. Further improvements in reliability came during the 1970s, when the tubes in the system were replaced with solid state, gallium arsenide field-effect transistors, which had recently been invented.

In all, about 35,000 TD2 repeaters and 5,000 TD3 repeaters were installed between 1950 and about 1975. From the early 1950s through the 1970s, most television network broadcasts in the U.S and in many other countries were carried by such microwave links. Microwaves also made possible electronic newsgathering setups for TV broadcasts from remote locations.

Retrieved from "https://ethw.org/w/index.php?title=Transcontinental_Television_Network_(U.S.)&oldid=154723"
Categories:
This page was last edited on 12 April 2017, at 13:51.
About ETHW
Policies and disclaimers