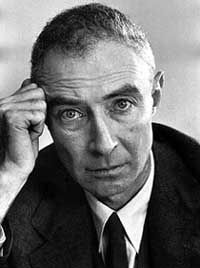 Julius Robert Oppenheimer was born in New York City on 22 April 1904 and exhibited considerable academic promise from an early age. As a student at New York City’s Ethical Culture School, he studied math and science with enthusiasm, but also showed considerable interest in and aptitude for classics, eastern philosophy, and foreign languages, subjects in which he maintained a lifelong interest. In 1925 he graduated from Harvard University, where he majored in physics. He then studied and conducted research at Cambridge University under Ernest Rutherford, before enrolling in Germany’s Göttingen University for his doctoral work. There, he came into contact with other prominent physicists, including Niels Bohr, Paul Dirac, and Max Born, with whom he exchanged ideas and theories. He received his Ph.D in 1927 and in 1929 returned to the United States to teach at the University of California at Berkley and Cal Tech. In both positions, he quickly built a reputation as both an engaging, popular teacher, and a brilliant scholar.

Though primarily absorbed in his work, Oppenheimer developed ardent left-wing sympathies and strongly opposed the rise of fascism in Europe in the 1930s. The U.S government established the Manhattan Project in 1941 under the command of General Leslie Groves, in response to the news that German physicists had split the atom, a new technology with potential military applications. Oppenheimer was recruited to work on processes for separating uranium-235 from natural uranium and for determining the critical mass of uranium-235 needed to sustain a chain reaction in an atom bomb. He was appointed scientific director of the project in 1942, working out of the Los Alamos, New Mexico nuclear weapons laboratory. There he convened a group of scientists that eventually swelled from 30 to over 3,000 to work on the bomb’s design.

Working nearly round the clock on the nuclear bomb, Oppenheimer dropped considerable weight from his already slender frame, burdened both by his intense schedule and his knowledge of and conflict over the implications of the work itself. When the first atomic bomb was detonated on 16 July 1945 in the New Mexico desert, Oppenheimer both marveled at the site and rued its potential destructive capabilities. Less than a month after the Los Alamos test detonation, nuclear bombs were dropped on Nagasaki and Hiroshima in Japan, ultimately resulting in Japanese surrender on 14 August 1945. Oppenheimer struggled with his role in the development of nuclear weapon technology, and has been quoted as ruefully declaring to President Harry Truman in 1946, “Mr. President, I have blood on my hands.”

After the war, Oppenheimer was appointed chairman of the U.S Atomic Energy Commission, and, amid much controversy, opposed the development of the hydrogen bomb. This opposition, as well as his left-wing past, made him an easy target of McCarthyites in the 1950s, and though found “not guilty” of treason, he was nonetheless stripped of his security access and his position with the Atomic Energy Commission. He returned to his academic roots as director of the Institute of Advanced Study in Princeton NJ, and spent much of his later life writing about scientific ethics and moral responsibility. In 1963, Oppenheimer received the prestigious Enrico Fermi Award from President Lyndon B. Johnson. He retired in 1966 died the following year of throat cancer, on 18 February 1967.

Retrieved from "https://ethw.org/w/index.php?title=Robert_Oppenheimer&oldid=177996"
Category:
This page was last edited on 6 December 2019, at 15:31.
About ETHW
Policies and disclaimers