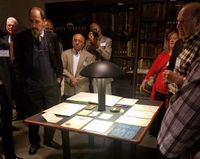 Attendees of the dedication ceremony view the Weston Collection at NJIT

The University buildings are open during normal business hours and any member of the public can enter the building to look at the plaque. The building is locked at night and on weekends. The university police monitor the alarmed areas of the building and this display can be alarmed if it is deemed necessary.

The late 1800’s was the dawn of the widespread use of electricity. Power companies were establishing themselves and building distribution systems to supply power for industrial and consumer uses. Street lighting using Arc lamps was introduced. The patent wars over the invention of the incandescent light bulb were fought as electric lighting became cost effective and a competitor to gas lighting. This rise required instruments to quantify the electricity. Efficiencies of motors and generators needed to be measured. Supplied voltages and currents needed to be controlled. Delivered power needed to be measured for billing. However, there was no efficient, calibratable and reproducible way to measure these quantities of electricity. Edward Weston invented solutions to all of the outstanding problems and brought the first reliable, repeatable, calibrated and portable instruments to market helping to enable the rapid expansion and acceptance of the use of electricity.

"Thomas Edison started the electric power and light industries in 1879. Electricity was not metered yet, so electrical measurement became vital as a means to buy and sell set amounts of electricity. Furthermore, these new industries each required multiple power generators with accurate voltmeters, ammeters, and wattmeters . The first electronic measurement instruments were difficult to transport, difficult to use and not suited to work in a laboratory" [1].

"Initially he [Edison] started out with a per-lamp rate. This was unsatisfactory so he developed a chemical ampere-hour meter that consisted of a jar holding two zinc plates connected across a shunt in the customer's circuit. Each month the electrodes were weighed and the customer's bill determined from the change in their weight. This meter was inefficient and error-prone. "[2]. For a more complete description of the electrochemical metering of Edison see “Six Years practical experience with the Edison Chemical Meter” [3]

"When measurements of the value of electrical appliances are actually made, the results are often discredited because of doubt as' to the accuracy of the instruments used, and probably the general indifference to accurate work manifested by many electricians may be justly ascribed to the absence of reliable measuring instruments. "[4]

Weston was inspired to start his company after having been hired as a consultant to measure the efficiency of a generator [5]. This took a week to perform which was typical of the time.

By creating a very stable, robust, calibrated and portable instrument Weston solved several key problems of prior meters including: the lack of the ability to calibrate them due to influence of earth’s magnetic field and the lack of permanent magnets, the sensitivity to resistive heating during measurement, the lack of accuracy and repeatability, and the complexity of making measurements. These meters became the standard of measurement internationally [6] aiding in the rapid spread and acceptance of the use of electricity.

Edward Weston took a holistic and systematic approach to all of the outstanding issues and solved each of them to create “the first highly accurate, direct-reading, direct current, portable voltmeter. A complete line of devices for both direct current and alternating current soon followed.” [10] Others working in this area managed improvements, but none approached the scope of the improvements incorporated into these meters[11].

These instruments contained the first truly permanent magnets, a prerequisite for meters to be calibrated and given a true scale. The material science included optimizing the iron alloys to hold their magnetization, establishing the magnetization through repeated hysteresis cycles to only about 2/3 of the saturation magnetization, and stabilization with a Weston developed heat treatment. The electrical science involved creating a very nearly complete magnetic circuit with minimal air gap so that the reluctance of the gap created negligible drag on the magnetic fields. Weston accomplished this by using a piece of soft iron on the end of each pole piece that was shaped to match a concentrically mounted soft iron cylinder. The gap between these pieces was where the coil rotated and averaged only .05” in Weston’s instruments. The curvature of these pole pieces ensured that the measuring coil moved in a uniform magnetic field ensuring linearity of the scale. [5]

Weston solved the heating problems of contemporary meters by developing two new metal alloys, Constantin and Manganin. Constantin had a negative temperature coefficient of resistance which defied the currently held belief that a defining property of metals was a positive coefficient. Thermoelectric generation of current at the Constantin-Copper interface determine that Manganin was chosen for the coils. This resulted in stable readings that allowed these to be the first meters that could be left in a circuit for more than a few seconds during measurements. These meters could have direct reading scales calibrated in the factory rather than before each measurement. This invention also improved the measurement of large voltages which required a large series resistance. Manganin was the ideal material for this because of its almost zero temperature coefficient of resistivity. [5]

To eliminate the effect of the magnetic field on the restoring springs, Weston rejected steel springs and developed a non-magnetic alloy of Copper with very low resistance which he used. He used two opposing springs to ensure constant restoring force. To lighten the weight of the moving coil he developed a new Aluminum alloy that allowed it to be drawn into a narrow and hollow pointer. [5] Weston developed a light copper (later Aluminum alloy) frame that his coils were wound around. [5] [11]. A key aspect of winding around a metal frame was that the eddy currents induced in the frame provided optimal damping to the needle. The coils that were simply stiffened with glue would oscillate back and forth across the correct reading.

Finally, in 1893 Weston invented the use of a shunt to allow measurement of large currents and the use of multiple calibrated current scales in a single instrument. Thick costly bars of copper to move current through the coils for measuring large currents were made obsolete by this new technique. The shunts took advantage of the low temperature coefficient of resistance of the manganin alloy developed for the coils.

These instruments were of such precision and accuracy that they were adopted as the standards by nearly every large United States company [12]. They were viewed so favorably in Germany that they were chosen by the Official Testing Committee of the Frankfurt International Electrical Exposition for their work testing all electrical equipment presented at the exposition in 1891. [13] Their importance in Japan is clearly indicated by the title "Weston was the Icon of Meters in Japan" of Dr. Eiju Matsumotos talk at the 2007 IEEE Conference on the History of Electric Power

[7] C. N. Brown, "Edward Weston and His Meter," in Sixteenth I.E.E. Week-End Meeting on the History of Electrical Engineering, 1988. File:C.N.Brown-Weston and his Meter.pdf

Notes: Edward Weston was a founder of the Newark Technical School which eventually became NJIT. He served on its board of trustees for its first six years of existence. He left his artifacts and documents to the the school and there is a museum of his artifacts in the University Library.