At this location in 1897, with local assistance, a researcher carried out some of the first wireless experiments. He transmitted a signal from this 'Shepherdess Stone' over a few meters and later, following six weeks of careful adjustments, over a distance of up to one and a half kilometers. 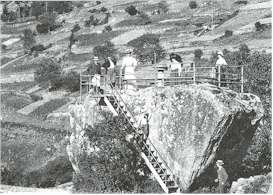 The plaque can be viewed in the town of Salvan, Switzerland, attached to the famous Shepherdess Stone.

Much of the information about this event was obtained in interviews some 70 years later, from the young assistant, Maurice Gay-Balmaz, who was 10 years old at the time of the experiment. Gay-Balmaz recalled working for a foreigner in 1897, when he was twelve years old, in all three interviews. In 1975 the village of Salvan posted commemorative plaque dating the wireless research as taking place in 1896. If listeners accepted Gay-Balmaz’s recollections, it should have read 1897.

The village of Salvan, Switzerland was known in the last years of the 19th century as a health resort. Located in the southwest of Switzerland in the Swiss Alps, very close to the France border, it was accessible only by a narrow mule path, nicknamed "route de Mont".

Below is the summary of research so far on Gustav Engisch, a prospective candidate for the wireless experimenter in Salvan in the summer of 1897. It appears that he may well have grown up in Berne Canton, a French-German corner of Switzerland about 100km north of Vevey on Lake Geneva. The challenge is to find a photo or passport information that would indicate hair color and height.

Inspired by Marconi's experiments, Gustav Engisch, a young electrical engineer from Vevey, Switzerland, began to experiment with wireless technology in 1896. He sold his patent rights to Fritz Nies and Albert Gümbel of Strasbourg, who then sold half these rights to Albert Zobel and Joseph Schmitz-Schlagloth. Originally from Cologne, these two convinced Ludwig Stollwerck, a chocolate manufacturer in that city, to support further experiments by Engisch. Stollwerck had numerous interests in innovation that made him a useful contributor to Engisch’s wireless project. He had pioneered vending machines for his chocolates and produced machinery through the German Machines Company. He had also licensed consumer technologies from Thomas Edison since the early 1890s, including the phonograph and cinematograph in 1895-96. The following year Stollwerck established the German Edison-Bell Phonograph Company; with the German-Austrian Edison Cinematograph Company, he also invested in the new medium of film. In the summer of 1897, the investors funded Engisch’s research in Vevey at the eastern end of Lake Geneva; Engisch had little success over several months of experiments. The following year Engisch demonstrated reliable communications up to 50 meters. Before committing more funding, however, Zobel, Schmitz-Schlagloth, and Stollwerck wanted Engisch’s technology tested by an independent authority. Engisch brought his system to Strasbourg in the spring of 1898, where Nies and Zobel had hired Professor Karl-Ferdinand Braun of the University of Strasbourg as a consultant. At the time, Braun shared with Wilhelm Röntgen a reputation as the first physicist in Germany. Braun quickly realized that Engisch’s apparatus was an imperfect copy of Marconi’s, and further discussion with the young engineer was difficult. Moreover, Nies had stimulated Braun’s interest in wireless telegraphy. Abandoning Engisch, the investors requested Braun’s professional services. Braun accepted their offer to underwrite his wireless research, leaving Engisch to pursue what became an inductive wireless telegraphy system over the next ten years.

(Today Vevey is a 90-minute railroad ride from Salvan via Martigny; it is 42 minutes from Vevey to Vernayaz, where in 1897 one would have taken another train up the hills to Salvan.)

After his investors abandoned him, Engisch continued to pursue his work, which included German patent 117415 for a grounded element for a lightning rod in February 1900, while he resided in Madretsch, a neighborhood of Biel in Berne Canton. Engisch focused on inductive wireless communications--that is, through the earth. In August 1904 he and the Deutsche-Erfinder Genossenschaft in Berlin registered two provisional patents, 17377 and 17378, in Great Britain for a “Wave Indicator for Wireless Electric Telegraphy” and “Improvements in Induction Apparatus.” (Electrical Engineer, 19 August 1904, p. 286) He also founded a company, World Syndicate Engisch for Wireless Telephony and Telegraphy GmbH, to profit from his patented or unpatented inventions in the field, capitalized at 200,000 marks. (Der Mechaniker XII (1904), p. 189) Engisch was residing in Biel when he and H. Stern of Berlin received German patent 174219 for a switching device to alternately charge and discharge multiple batteries in April 1905. Four years later, in 1908, Johannes Zacharias and Hermann Heinicke promoted Engisch’s approach in their Praktisches Handbuch der drahtlosen Telegraphie und Telephonie (Vienna and Leipzig, 1908), p. 213, 220-1. No further record of Engisch’s wireless technology or related business is available. In 1910, still based in Berlin, he received U.S. Patents 973,929 and 949,420 for a reversible turbine and a toy airship, respectively.