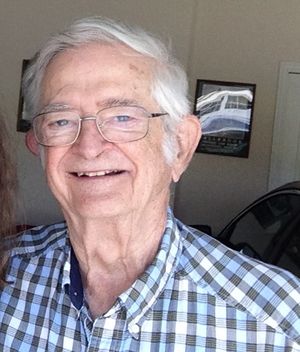 James V. Boone merged personal and family interests in electronics, aviation, and patriotism to spend his career in the United States' security establishment during the Cold War (1946-1990). He helped pioneer the development and use of electronics in collecting data transmitted to and from the satellites and spacecraft of the Soviet Union from both satellites and ground stations while working at the U.S. Air Force, the National Security Agency, and TRW Incorporated.

Boone was born the only child of Dorothy Bliss and Virgil Bennett Boone, on 1 September 1933 in Little Rock, Arkansas, USA. From an early age, Boone developed an interest in electronics through his exposure to the equipment in his father's business, Boone Radio Service (see first two photos below). Seeking to support the U.S. war effort in his middle age, Boone's father sold his electrical supply and radio shop and moved the family in 1942 to Grand Isle, Louisiana. There he joined the first Civil Air Patrol (CAP) on the U.S. Gulf Coast and serviced the avionic systems of the airplanes combating the German U-boats attacking shipping offshore (see third photo below).

Boone was accepted at Tulane University in 1951 with the intention of becoming an engineer and pilot. He joined the Air Force Reserve Officers Training Corps (ROTC), became the treasurer of the Joint Student Branch of the American Institute of Electrical Engineers/Institute of Radio Engineers, and was elected president of the student body of the Engineering College. As a result Boone also served on the Student Council.

During the summers he worked in Shell Oil Company's exploration division on the Gulf Coast, beginning in the data reduction group. There he organized data from the field crews so that the seismologists could see the patterns better and make their calculations. The next two years Boone joined an exploration crew. As he recalled, "We lived on a house-boat like thing anchored in a bayou somewhere several hours by boat from Morgan City [Louisiana]. On the edge of a swamp. Our job was to clear a survey path through that swamp, survey in lines, set geophones, drill and load holes with explosives, set off explosive charges, record the reflected sonic data, pick up the equipment, move ahead, and do it again. And again. And again." (See fourth photo below.)

In 1955, Cadet Major James Boone, Omicron Kappa Delta, received his bachelor’s degree in electrical engineering (BSEE) as an ROTC Distinguished Military Graduate. Shortly afterwards he and Gloria Marjorie Gieseler married on 5 June. After a short stint at Glenn L. Martin Aircraft Company in Baltimore, Maryland, Boone joined the Air Research and Development Command that year as a captain at the Wright Air Development Center at Wright-Patterson Air Force Base in Dayton, Ohio, which was responsible for airborne electronics equipment. He also studied for an MSEE from the Air Force Institute of Technology, graduating in 1959.

Boone's education and assignment made him one of the pioneers in satellite-based electronic intelligence (ELINT) and signal intelligence (SIGINT). After the Union of Soviet Socialist Republics (USSR) put the Sputnik satellites into orbit in 1957, congressional funding for the Air Force's Weapons System 117 (WS-117) for reconnaissance and intelligence gathering by satellite expanded dramatically. After receiving his master's degree, Boone was reassigned to the Air Force Security Service as a design engineer at the NSA in Fort Meade, Maryland. Over the three years that he joined in improving the processing of telemetry intelligence (TELINT) on the Soviet Union's surface-to-air (SAM), anti-ballistic missile (ABM), and intercontinental ballistic missile (ICBM) tests, the Air Force contracted with Airborne Instruments Laboratory to design and install the Ferret series of ELINT systems for its Samos satellites. Five of these were launched between 1960 and 1962; information from these systems on Soviet missile and space programs were regularly included in the U.S. president's daily intelligence briefing.

In June 1962, Secretary of Defense Robert McNamara re-organized the administration of the National Reconnaissance Office (NRO) to assume control of the National Reconnaissance Program, which was comprised of satellite and airborne intelligence gathering by the Naval Research Laboratory (NRL), the Central Intelligence Agency (CIA), and the Air Force. The NSA continued to expand the network of stations receiving, collecting, or processing ELINT data in allied nations around the Soviet Union. It also automated the processing of the large volume of Soviet radar telemetry that the NRL's low-orbit GRAB (Galactic RAdiation and Background) satellite program intercepted and transmitted to ground stations, which the Air Force Security Service helped to staff. GRAB became the focus of NRO's Program C, renamed Poppy. Over the next fifteen years, Boone would contribute in important ways to improving Poppy's capacity for collecting SIGINT from the expanding number and variety of increasingly sophisticated Soviet land- and sea-based radar systems, and to ensuring that this information was routed to the relevant military and intelligence organizations for timely use.

That year, Boone left the USAF to become a civilian employee of the NSA, where he worked on a variety of classified projects, including Poppy, for twenty years. He and his family spent two years in Germany in 1963-65, where the NSA established satellite tracking, radar, and wireless data collection capabilities at Bad Aibling.

During this time he also visited the NSA station under construction at the Kagnew station in Asmara, Ethiopia (now the capital of Eritrea). The STONEHOUSE station's mission was three-fold: collect SIGINT from the USSR's new Molniya satellite communications network; from its Luna series of robotic lunar space craft; and from deep-space craft sent elsewhere in the solar system. Its first assignment was Luna-5 in May 1965; STONEHOUSE continued to contribute to analysis of the problems and successes of the Soviet lunar program through collection of decimeter-wave, narrow-band telemetry that surpassed the quality of data collected by the similar, Soviet, Pluton station in Yevpatoria, Crimea.

After managing the implementation of the NSA's Electronic Warfare Advisory Element (EWAE) in the early 1970s to coordinate the provision of SIGINT to the armed services' electronic warfare operations, Boone received the agency's Exceptional Civilian Service Award from the NSA Director, General Lew Allen, in 1975. Three years later he was appointed deputy director of NSA for research and development, where Boone was fully responsible for the research and engineering functions of the Agency's SIGINT and communications security (COMSEC) missions. In that time, he oversaw the launch and operation of the first three SIGINT satellites of Program 366, codenamed CHALET before a security breach in 1979 necessitated a change in name, to VORTEX.

Boone left government service in 1981 to join TRW, Inc., in Redondo Beach, California, the center for its reconnaissance and relay satellite programs. There he rose from special assistant to the general manager of the Military Electronics Division through a series of positions of increasing responsibility in the Electronic Systems Group, the Defense Communications Division, and the Systems Integration Group before retiring as vice president and general manager of the Electronic Systems Group in Fairfax, Virginia, in 1996.

Boone also served on the board of directors of the Society of Tulane Engineers and the Armed Forces Communications and Electronics Association, and held adjunct instructorships at George Mason University and the Joint Military Intelligence College. He published A Brief History of Cryptology through the Naval Institute Press in 2005, and was a devoted member of and volunteer for the National Cryptologic Museum Foundation where he chaired the Acquisitions Committee and helped obtain architecture services for the museum's new building. He also co-authored Cryptology’s Role in the Early Development of Computer Capabilities in the United States with James J. Hearn for the NSA's Center for Cryptologic History in 2015.

Boone was a Life Senior Member of IEEE and Honor Roll supporter of the IEEE Foundation. He passed away on 12 May 2020, predeceased by his wife in 2016 and remembered by three children, nine grandchildren, and six great-grandchildren.

Applying Advanced Technology to Cryptologic Systems: Some Special Management Challenges - an adaptation of a talk that was given at the 2013 Symposium of the Center for Cryptologic History

Cryptology’s Role in the Early Development of Computer Capabilities in the United States with James J. Hearn for the NSA's Center for Cryptologic History in 2015.