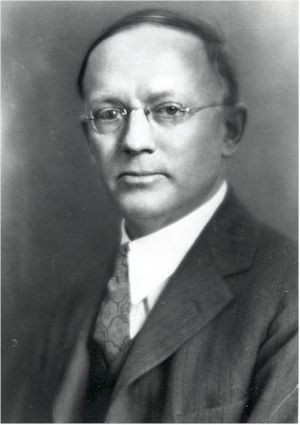 Robert H. Marriott, IRE President, 1912, completed the first Pacific Coast commercial broadcasting system operative between an island off the coast of California and the California mainland. Also, he was the first man in America to use the telephone and detector method for radio reception.

Robert H. Marriott, a founder and the first President of The Institute of Radio Engineers, was known to his associates for his vigor, vision, and co-operativeness, tenacity of purpose, and broad knowledge. He was widely regarded as one of the leading contributors to the advancement of radio communication and to the growth and success of The Institute of Radio Engineers.

Mr. Marriott's pioneering efforts to form a radio engineering society materialized in 1909 with the founding of the Wireless Institute. He served as its President until 1912 when, through the efforts of Alfred N. Goldsmith, John V. L. Hogan, and himself, the Wireless Institute merged with the Society of Wireless Telegraph Engineers to form The Institute of Radio Engineers. He became the first IRE President in 1912, and served as Vice-President in 1913 and on the Board of Directors in 1914-1916, 1920-1922, and 1926-1932. Mr. Marriott was instrumental in forming the Seattle Section of the IRE, and became the first Chairman of that Section in 1915-1919.

Born on February 19, 1879 at Richwood, Ohio, Mr. Marriott started his radio experimental work in 1897, at the Ohio State University, where he graduated with the Bachelor of Science degree in 1901. He was the first man to put into use in America the telephone and detector method of radio reception, a system that was a forerunner of the vacuum tube. He completed the first Pacific Coast commercial broadcasting station operative between Avalon, Catalina Island, and the California mainland. Mr. Marriott did experimental work for a number of early radio concerns, was a radio aide of the U. S. Navy in 1915-1925, and was a consulting engineer of the Federal Radio Commission in 1928- 1929. He continued in private practice as a consultant until his retirement in 1943.

Mr. Marriott was responsible for a number of patents and was the author of many papers and articles on radio which included a series of articles in the New York Herald Tribune in 1927 and 1928. Mr. Marriott became a Fellow of the IRE in 1915 and a Life Member in 1949. He was a Fellow of the American Institute of Electrical Engineers, and an Honorary Member of the Radio Club of America, and of the Veterans Wireless Operators Association. Mr. Marriott's last illness prevented the formal presentation to him of an engrossed testimonial volume, signed by all of the members of the IRE Board of Directors, attesting to its full recognition and deep appreciation of the great worth of his work in the foundation, administration, and upbuilding of The Institute of Radio Engineers.

Marriott died on October 31, at his home in Brooklyn, New York. Shortly afterward the IRE board adopted a resolution which contained the following: His foresight in discerning the need for a society of radio engineers was a powerful stimulus to the foundation of the Institute. His unselfish, skilled, and unlimited devotion to the conduct of the activities of the Institute in its earlier years contributed substantially to the creation of the firm foundation upon which the Institute has grown.

Retrieved from "https://ethw.org/w/index.php?title=Robert_H._Marriott&oldid=155338"
Categories:
This page was last edited on 9 June 2017, at 15:43.
About ETHW
Policies and disclaimers