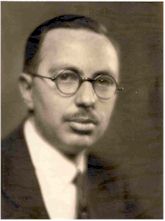 John V. L. Hogan, IRE President, 1920, was one of the founders of the classical music radio station WQXR. He was also the founder of the Society of Wireless Telegraph Engineers.

In 2009, the renowned classical music radio station, WQXR — which was the last commercial classical radio station in the New York City area — sold its frequency, and became part of the public radio network at a new frequency and at one tenth its former signal strength. Among WQXR’s founders was former IRE President John Vincent Lawless Hogan. John V. L. Hogan was not only a prolific inventor who presided over some important developments in radio and facsimile, he was also a crucial early leader who shaped the IRE — and thus IEEE’s — institutional history.

He was born in Philadelphia, Pennsylvania, U.S.A. on 14 February 1890 and was raised in New York, where he attended the Horace Mann School. As a teenager, he was a radio amateur and worked as an assistant to Lee de Forest. He studied electrical engineering at Sheffield Scientific School at Yale University, where he earned honors in physics and mathematics, and in 1909 became a telegraph engineer for Reginald Fessenden’s National Electric Signaling Company. He was the Chief of the Operating, Erection and Inspection Department of the company during the extremely important long-range radio tests using the United States Navy’s then new Arlington wireless station and the cruiser USS Salem, which were carried out during the winter of 1912-1913. The Salem sailed from the Delaware River east across the Atlantic Ocean to Gibraltar. The transmitting station at Arlington possessed high-power spark-gap as well as electric-arc dischargers, and it sent test messages to the ship alternately using one type then the other. By the time the Salem reached a distance of 1200 miles (1920 km) signals from the arc were beginning to be stronger than the ones from the spark. Moreover, the messages sent via arc could be heard at Gibraltar, 6400 km away, during the hours of daylight. The experiments confirmed the Austin-Cohen formula for radio wave propagation and showed the feasibility of continuous wave transmission over very long distances.

Hogan had been a founder of the Society of Wireless Telegraph Engineers, and he helped preside over its merger with the Wireless Institute in 1912. This was the merger which formed the Institute of Radio Engineers, one of IEEE’s predecessor bodies. Hogan went on to become a Fellow of the IRE, and in 1920, became its President.

During the 1920s he experimented with television, radio and facsimile transmission. In 1921, he went into business for himself as the president of Hogan Laboratories, Inc., a consulting firm advising on the construction of radio stations, and inventions in radio and facsimile. He was issued patents for a rectifying heterodyne circuit, and for single dial tuning of radio sets, thus increasing their ease of use and improving their popular appeal. His founding of what was to become the classical radio station WQXR began in 1928 began as part of his work with FM radio and television. He was broadcasting a sound program to match a visual one over an experimental frequency. People with radio receivers appreciated his choice of music and the quality of the transmissions, and began asking for more programs. In 1934, he was operating the station as W2XR, and in 1936, Hogan partnered with Elliot Sanger and founded the Interstate Broadcasting Company, which began operating W2XR as WQXR. In 1944, The New York Times bought it.

During World War II, Hogan served as Special Assistant to Vannevar Bush, Head of the Office of Scientific Research and Development. He worked on communications for the National Defense Research Committee and the Army Signal Corps, principally with radar, guided missiles, and proximity fuses.

In 1956, he was awarded the IRE Medal of Honor “for his contributions to the electronic field as a founder and builder of The Institute of Radio Engineers, for the long sequence of his inventions, and for his continuing activity in the development of devices and systems useful in the communications art.” Hogan was married to the former Edith McLennan Schrader and had a son. John Hogan died on 29 December 1960.

Retrieved from "https://ethw.org/w/index.php?title=John_Hogan&oldid=146329"
Categories:
This page was last edited on 1 February 2016, at 17:22.
About ETHW
Policies and disclaimers