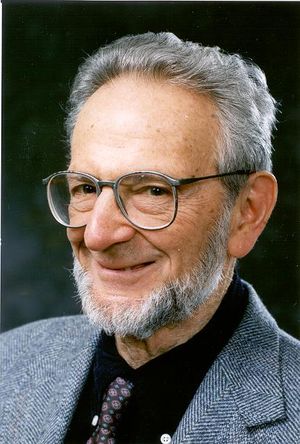 Dr. Gold's first professional association was with the Avion Instrument Corporation ofNew York City. In 1950, he joined the Hughes Aircraft Company in Culver City, California and spent three years working on statistical problems related to guided missile research. In 1953, he joined MIT Lincoln Laboratory and has worked there on problems of pattern recognition, speech coding and digital signal processing. He retired from Lincoln in 1988. Currently he teaches a graduate course on audio signal processing by humans and machines at the University of California at Berkeley.

Dr. Gold has performed innovative research in several fields. His, work in the 1950s on pattern recognition led to one of the earliest devices that could automatically recognize hand-sent Morse code. In the late 1950s and early 1960s he developed a pitch detector for use with vocoders that became a standard algorithm. Many pitch detectors were developed later and compared with the Gold algorithm.

In the early 1960s, Dr. Gold, together with Charles Rader and Dr. Joe Levin, pioneered the emerging field of digital signal processing (DSP). They developed concepts of digital filtering as it applied to audio problems. These concepts proved applicable to diverse fields such as radar, communications, sonar, seismology and biology. Of particular significance were developments of digital filter design methods in both the time and frequency domains, and analysis of quantization effects.

In 1955-56, Professor Ken Stevens of MIT invited Dr. Gold to spend an academic year in the MIT Electrical Engineering Department. During that year, Dr. Gold taught a groundbreaking course on digital signal processing. This resulted in dissemination of new material that inspired other well-known contributors to digital signal processing. In 1969, Dr. Gold and Charles Rader co-authored the landmark text Digital Processing of Signals.

Dr. Gold is a Fellow of the IEEE and the Acoustical Society of America. He is also a member of the National Academy of Engineering. In 1954-55 he was a Fulbright Fellow and spent a year in Rome, Italy, lecturing on probability theory as it applied to linear systems. Ben Gold has published forty papers and received a number of awards, including the IEEE Achievement Award and the IEEE Society Award from the Acoustics, Speech and Signal Processing Society.

Dr. Gold and his wife, Sylvia, resided in Concord, Massachusetts. They had two daughters, Laura and Lisa, who reside in nearby towns. His outside interests included listening to and analyzing music, hiking and graphic arts.

Retrieved from "https://ethw.org/w/index.php?title=Bernard_Gold&oldid=173168"
Categories:
This page was last edited on 29 January 2019, at 20:23.
About ETHW
Policies and disclaimers