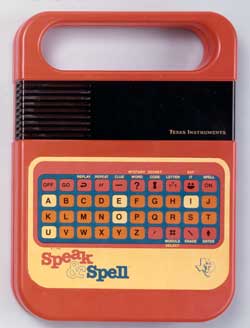 The Speak & Spell toy, introduced by Texas Instruments in 1978, pronounced words typed into its keyboard. Although a child's toy, it contained a powerful digital signal processing chip, and was the first mass-produced product to use DSP technology. Courtesy: Texas Instruments.

A historical trend of the last half-century is the replacement of analog signals by digital signals. For example, music was always recorded and transmitted in analog form until the 1980s when the CD player made digital recording of music common. When a CD is made in the studio, the music is first converted into an electrical analog signal by a microphone, but then the electrical signal is converted into a sequence of zeros and ones by sampling (measuring the intensity of the sound at specific points in time, many thousands of times a second) and quantizing (assigning each intensity to one of a finite number of intensity levels). It is this sequence of zeros and ones that is etched into the spiral track of the CD.

Retrieved from "https://ethw.org/w/index.php?title=Digital_Signal_Processing&oldid=154694"
Categories:
This page was last edited on 12 April 2017, at 13:51.
About ETHW
Policies and disclaimers