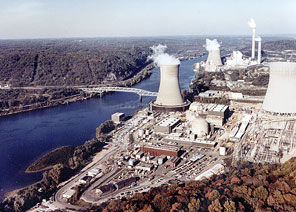 On 26 May 1958, President Dwight Eisenhower opened the Shippingport atomic power station in Pennsylvania as part of his “Atoms for Peace” program. Jointly operated by the Department of Energy and the Duquesne Light Company, Shippingport was the first commercial, central electric-generation station in the United States that used nuclear energy. The large quantities of heat generated in the nuclear reactor were used to boil water and then to generate electricity by turning the steam-driven turbines. In a ceremony at the White House, President of the United States Dwight Eisenhower, waving a “neutron wand”—actually a ceremonial shaft that had been outfitted with a light bulb to look like something from a future age—flipped a switch and three hundred miles to the west of Washington, DC the Shippingport atomic power plant sprang to life.

Shippingport embodied a fervent promise that the technology that had devastated Hiroshima and Nagasaki could be made safe and useful for peaceful ends. The stage was set for Shippingport four years earlier. In December of 1953, shortly before the first hydrogen bomb tests in the Marshall Islands, Eisenhower told the United Nations that the United States was committed to turning its capacity to harness atomic power into a positive good. Atomic power would generate electricity to help build a better world. “The United States,” he said, “pledges before you—and therefore before the world—its determination to help solve the fearful atomic dilemma—to devote its entire heart and mind to find the way by which the miraculous inventiveness of man shall not be dedicated to his death, but consecrated to his life.”

The first atomic power facilities started operating in the United States in the early 1940s. Their chief function had been to generate plutonium for use on Hiroshima and Nagasaki, and later for tests. But as a by-product these reactors also generated large quantities of heat. By harnessing this heat to boil water, steam would be created to turn turbines and generate electricity. Given the apparently infinite power of the atom, there seemed no reason why nuclear electricity could not also be infinitely inexpensive, or as its supporters would later put it, “too cheap to meter.” With the commercial application of atomic energy, the atomic age can be said to have really begun.

Everyone, however, did not accept thermonuclear energy. Private utilities were skeptical about an untested, possibly dangerous technology, and only government insurance guarantees, fuel subsidies, and extensive research funding allowed commercial atomic power to develop further.

From 1984 to 1989, Shippingport again made history as the first nuclear plant to be decommissioned and dismantled. As a result of the successful decommissioning strategy, important precedents were set in decontamination technology and nuclear waste handling techniques.

Retrieved from "https://ethw.org/w/index.php?title=Shippingport_Nuclear_Power_Plant&oldid=157481"
Categories:
This page was last edited on 23 November 2017, at 06:46.
About ETHW
Policies and disclaimers