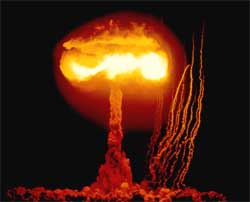 The mushroom cloud of an atomic bomb.

The nuclear bomb is the most powerful weapon ever created, and today there are enough in military arsenals to kill every living thing on the planet several times over. There are two basic kinds of nuclear weapons. The first to be invented is now known as the fission bomb, or sometimes simply the atomic bomb or A-bomb. The second, invented in the late 1940s, is the fusion bomb, which is also known as a hydrogen or H-bomb. The fission bomb relies on the fact that when atoms are split apart they release large amounts of heat, light, and radiation. The fusion bomb forces sub-atomic particles to join together or “fuse,” and when that happens the bomb releases excess energy and bits of atoms. If enough atoms are split or fused the result is a tremendous explosion.

Scientists first imagined an atomic bomb in the 1930s, using the work of Albert Einstein to theorize that splitting atoms into their component parts would release large amounts of energy. In 1938, physicists in Germany succeeded in splitting an atom, proving that it could be done. Although splitting a single atom releases only a very small amount of energy, this experiment paved the way for the development of a weapon. In 1939, when the German military began its conquest of Europe, American scientists convinced Albert Einstein to sign a letter to President Franklin Roosevelt, warning him of the danger of falling behind in the effort to build an atomic bomb. Although the German atomic bomb effort was fruitless, the Americans didn’t know that at the time and the U.S plunged into research in atomic weapons. By 1945 they had developed the two types of bombs.

The fission bomb, the type of bomb the U.S dropped on Hiroshima, Japan on 6 August 1945, was developed first. This bomb, called “Little Boy,” contained a large sphere of modified uranium and other metals, kept in separate compartments. A smaller uranium bullet, fired from a gun inside the bomb, hit the sphere, combining the ingredients. This caused some of the atoms to split apart, and as they did, they released energy and subatomic particles that flew out and hit the other uranium atoms. This continued and accelerated to cause a chain reaction, resulting in a huge explosion equal to 15,000-20,000 tons of dynamite; ground temperatures just after the blast were estimated to be 7,000 °F (3871 °C).

Another type of fission bomb, also developed in World War II and dropped on Nagasaki, Japan on 9 August 1945, was called “Fat Man.” In this bomb, the core of plutonium and other ingredients was surrounded by powerful explosives. When detonated, the compression of the core caused it to erupt into uncontrolled fission, and then an explosion. Fat Man’s explosion was the equivalent of 23,000 tons of dynamite.

When the Soviet Union demonstrated their atomic bomb in 1949, scientists such as Edward Teller and others in the U.S sought an even more powerful weapon. The result was the fusion bomb, also known as the hydrogen bomb or H-bomb. In this, an ordinary fission bomb was used to create enough heat and pressure to cause fusion (joining together) of two rare substances (similar to hydrogen). During this fusion, leftover particles are also split off, and when this happens they release energy just like an atomic bomb. Also, because the atom that results from the fusion requires less energy to stay together than the atoms that formed it, more energy is released. The result was an even more powerful explosion, and if the fusion bomb is put inside a uranium casing, the first explosion turns the casing itself into an atomic bomb, making the weapon even more deadly. The first fusion bombs were roughly the equivalent of 1,000,000 tons of dynamite.

To date, no country except the United States has ever used an atomic bomb in battle. However, since 1945 the Soviet Union (now Russia), Great Britain, France, China, India, and Pakistan have all demonstrated atomic bombs, while South Africa, Israel, and Iraq are known to have been working toward such weapons.

Retrieved from "https://ethw.org/w/index.php?title=Nuclear_Bombs&oldid=160082"
Categories:
This page was last edited on 11 July 2018, at 14:27.
About ETHW
Policies and disclaimers