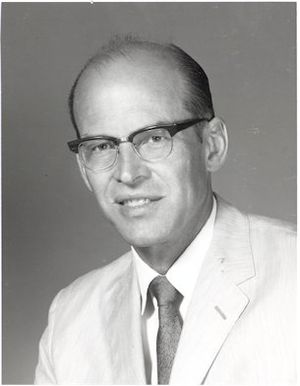 Dr. Robert N. Hall, physicist at the General Electric Research Laboratory, was born on December 25, 1919 in New Haven, Connecticut. In 1937, after receiving his preparatory education at Alameda High School in Alameda, California, he entered the California Institute of Technology. After three years of college, he took time out to work as a mechanical engineer at Lockheed Aircraft Corporation, where his main job was fatigue-testing metal parts, mostly for the P-38 "Lightning" and the Constellation. He then returned to the California Institute of Technology, where he received his B.S. degree in physics in 1942.

Subsequently, Robert Hall joined the General Electric Company as a test engineer. During the war years, he worked with microwaves, resonant structures in waveguides, and magnetrons. The magnetron, invented in 1921 by Dr. Albert W. Hull, who was then Assistant Director of the General Electric Research Laboratory had remained something of a laboratory curiosity until World War II, when it proved to be an almost ideal generator of microwaves for radar transmitters. At the end of the war, Robert Hall was undecided about his next step. But Dr. Hull talked him into returning to the California Institute of Technology for his doctorate in low-energy nuclear physics. He had already taken a number of graduate courses in that field, and he was awarded a predoctoral fellowship by the National Research Council. In addition, the California Institute of Technology was operating on a year-round basis-a fact of some importance to the young scientist, since, by that time, he was married and had one child.

At the Institute, Robert Hall worked under Professors W. A. Fowler and C. C. Lauritsen, receiving his Ph.D. in 1948. That fall, he rejoined the staff of the General Electric Research Laboratory in Schenectady, New York. At about this time, the Bell Laboratories announced the development of the transistor. "I was trying to find a field," Dr. Hall recalls. "Without my realizing what he was up to, Dr. Hull maneuvered me into the study of semiconductors. There's no question but what he was right." Since that time, Dr. Hall has made a series of widely recognized contributions to solid-state physics. One of his first investigations involved the preparation of high-purity germanium crystals. As an outgrowth of this work, he found that indium and germanium could be fused together to make alloyed p-n junctions, the basic elements of power rectifiers and some transistors. Power rectifiers of this type, using silicon, are now used widely for the production of d-c power in installations in the megawatt range and have recently been employed in large electric locomotives. Dr. Hall's investigations of the electrical properties of power rectifiers led to advances in the understanding of recombination in semiconductors and the identification of the phenomenon known as "Hall-Shockley-Read recombination." His later studies showed how desirable impurities are segregated during the growth of germanium crystals, leading to the important "rate-growing" and "melt-back" processes for the mass production of semiconductor crystals used to make transistors and other solid-state electronic devices.

In 1958, Dr. Hall turned his attention to the newest member of the semiconductor family-the tunnel diode. This device, first reported in 1958 by Japanese physicist, Leo Esaki, performs some of the functions of the transistor, but operates on a different principle and has advantages (as well as disadvantages) that the transistor does not. Dr. Hall is noted for his contributions to the understanding of semiconductor tunneling phenomena, and has investigated a number of promising compounds for use in tunnel diodes. His work has helped scientists to analyze the performance of tunnel diode devices in greater detail, and to increase further the usefulness of these devices as electrical circuit components. During the fall of 1962, Dr. Hall and a group of his associates in the Laboratory's General Physics Research Department were the first to announce successful production of coherent light from a semiconductor junction laser. In this new solid-state device, coherent light is generated directly by passing an electric current through a semiconductor crystal.

For his work, Dr. Hall has been issued a total of 17 patents, several of them covering the original process of making semiconductor alloy junctions used in the manufacture of transistors, diodes, and rectifiers. He is a Fellow in the American Physical Society and the Institute of Electrical and Electronics Engineers.

Dr. Hall lived in Schenectady, New York with his wife and two children, a son and a daughter. In his spare time he enjoyed sailing and fishing. His wintertime hobbies included folk dancing and sail skating.