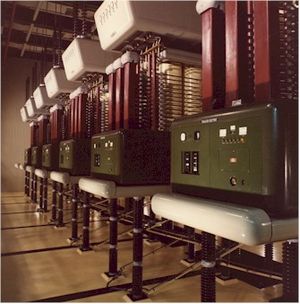 On 17 June 1972, the Nelson River High Voltage Direct Current (HVDC) transmission system began delivery of electric power. It used the highest operating voltage to deliver the largest amount of power from a remote site to a city. The bipolar scheme gave superior line reliability and the innovative use of the controls added significantly to the overall system capabilities. Finally, the scheme used the largest mercury arc valves ever developed for such an application.

The two plaques may be viewed at either Manitoba Hydro's Radisson and Henday Station (Nelson River),Manitoba, Canada, or at Manitoba Hydro's Dorsey Station, Rosser, Manitoba, about 26km northwest of Winnipeg, Canada.

The Province of Manitoba is situated in the center of Canada, immediately north of the Midwest United States. The Nelson River, located in the province, was up until the early 1960s an untapped resource for hydroelectric power. To provide electricity to the growing demand of the province, the government decided to tap into this abundant resource. Approximately 4,000 MW of generating capacity w as developed, 3,600 MW of which was hydro. Most of the hydro generation is located in the northern portion of the province. Quite remote from the load center in the south, Manitoba's two largest generating plants, Kettle Rapids and Long Spruce, with a combined capacity of 2200 MW, are located in the north.

More than 550 miles of transmission lines from the Kettle Generating Station to Winnipeg were constructed. Power is generated in alternating current (ac) and converted to direct current (dc) for economical reasons. Direct current was chosen because it loses less power and is more stable. Also, dc lines are 2/3 less expensive than ac lines.

To support the dc transmission line, over 3,900 guyed towers and 96 self supporting towers had to be constructed. One of the challenges of establishing this transmission line was the varied terrain and the presence of permafrost, which existed in some areas at 30ºF to 32º F (-1ºC to 0ºC), making the foundation subject to a reduction in soil strength and settling of up to 3 feet (1 meter).

The output of these plants (Kettle and Long Spruce) is then transmitted from Radisson and Henday Converter Stations (ac to dc) , via the Nelson River dc line, more than 600 miles (965 km) southward to Dorsey Station, located near Winnipeg. Initial DC service was established in 1972 and expanded to match generation additions, bringing the present total transmission capability to 2 , 500 MW.

The significance of this low-voltage line lies in the fact that for the first time two HVDC bipoles were paralleled and deparalleled using high voltage high-speed switches, the system being unique in the sense that Bipole 1 uses mercury arc valves while Bipole 2 comprises second generation thyristor valves.

A bipolar transmission line is defined as having two conductors consisting of one positive pole and one negative pole, which normally operate at equal current. The term bipole refers to the conversion equipment in the converter stations at both ends of Manitoba Hydro's HVDC transmission lines.

The other major advantage of the HVDC system is very low electric rates, one of the lowest in North America.