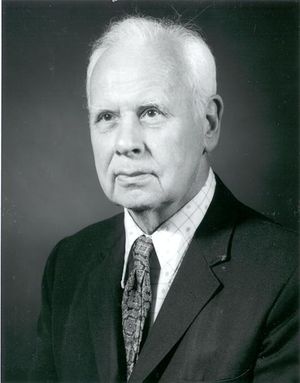 George R. Stibitz, the first recipient of the Emanuel R. Piore Award, was was born on April 30, 1904 in York, Pennsylvania. He attended Moraine Park, an experimental school in Dayton, Ohio, and graduated from Denison University in 1926 with a Ph. B. in Applied Mathematics. He received an M. S. from Union College in 1927 and a Ph. D. from Cornell University in 1930 in the field of Physics.

Following receipt of his Doctorate he joined Bell Telephone Laboratories where he served as a mathematical consultant. From 1940 to 1945 he was on loan to the Office of Scientific Research and Development. Following World War II, he was an independent consultant in applied mathematics for various government and industrial agencies. In 1964 Dr. Stibitz joined the Department of Physiology at Dartmouth Medical School as a Research Associate. Since that time he has been working primarily on applications of physics, mathematics and computers to biophysical systems. He became a Professor in 1966 and Professor Emeritus in 1970.

At present Dr. Stibitz is working on applications of random walks to diffusion in capillaries, on evaluation of dissociation coefficients from binding data, and on the determination of the electrical properties of cell membranes.

Dr. Stibitz is internationally recognized as one of the major figures in the development of the modern digital computer. His interest in computers arose from an assignment in 1937 to study the magneto-mechanics of telephone relays; he turned his attention to the binary circuits controlled by the relays, to the arithmetic operations expressible in binary form, and in November 1937, to the construction of a 2-digit binary adder.

The next year, with the help of S. B. Williams of Bell Labs, he developed a full-scale calculator for complex arithmetic. This computer was operational late in 1939 and was demonstrated in 1940 by remote control between Hanover, New Hampshire and New York. Several binary computers of greater sophistication were designed and built in collaboration with S. B. Williams and E. G. Andrews, also of Bell Labs. In these computers were introduced the excess- 3 code, floating decimal arithmetic, self-checking circuits, jump program instructions, taped programs and "table-hunting" sub-computers.

Dr. Stibitz is the recipient of the Harry Goode Award of the American Federation of Information Processing Societies (1965) and an Honorary Doctorate of Science from Denison University (1966).

He has a wide range of interests and hobbies including painting, construction of electronic musical instruments, and generation of energy from wind power. George Stibitz and his wife, Dorothea, who have two daughters, reside near Dartmouth where he is continuing his research on the mathematical analysis of medical questions.

Retrieved from "https://ethw.org/w/index.php?title=George_R._Stibitz&oldid=171808"
Categories:
This page was last edited on 17 December 2018, at 18:37.
About ETHW
Policies and disclaimers