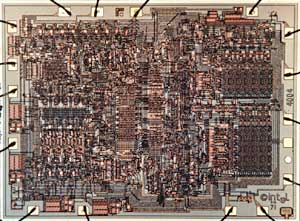 The Intel 4004 microprocessor, which was introduced in 1971. The 4004 contained only 2300 transistors and performed 60,000 calculations per second. Courtesy: Intel.

In the late 1960s, lots of engineers knew that circuits could be shrunk down to a size small enough that they could fit entirely on a chip. Gilbert Hyatt of the Micro Computer Company and Gary Boone at Texas Instruments both patented their ideas for single-chip computers. But the most successful version of this idea came from Intel. In the late 1960s, Intel was in the business of making memory chips for computers and calculators. Customers sometimes came to Intel with special projects and requests. One of those requests was for a set of chips for a new calculator that a Japanese company, Busicom, wanted to make in 1969. Intel engineers Marcian “Ted” Hoff, Federico Faggin, and Stan Mazor, drew up the plans for a powerful new chip that they would eventually name the microprocessor. The microprocessor could be used in a simple desk calculator or in a much more powerful general-purpose computer. The engineers designed it so that nearly everything the computer needed to work was right there on a single chip. All that would be added was a source of electric power, a keyboard to input data, and a display to show the output. 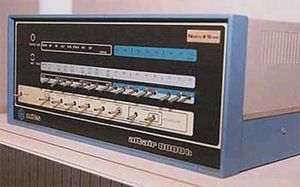 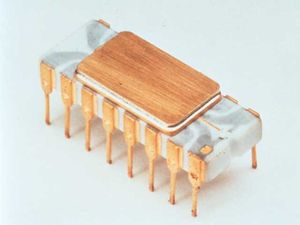 The flexibility built into the Intel microprocessor, called the "4004," was evident to other engineers. A few years later, in 1975 Electronics Magazine published an article on an affordable computer called the Altair that used the new Intel 8080, a second-generation microprocessor. Readers had to build the computer from parts to keep the cost low. This computer kit was sold by a company called MITS. In 1980 IBM decided to use an Intel microprocessor called the 8088 for the first mass-produced personal computer, which was appropriately called the Personal Computer. A new era was underway. As people began to use personal computers for new things, such as word processing and graphic creation, the number of chips inside the box grew larger, but the microprocessor remains the center of attention even today.

Retrieved from "https://ethw.org/w/index.php?title=Early_Microprocessors&oldid=178240"
Categories:
This page was last edited on 4 February 2020, at 21:51.
About ETHW
Policies and disclaimers