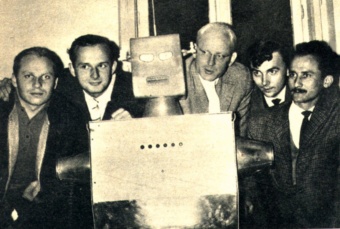 Cybernetics group team with their robot TIOSS on Zagreb ETH university, 1962. Branimir Makanec is pictured directly to the right of the robot

Automation is the use of information technologies and control systems to reduce the need for human labor in the production of goods and services. Automation is one step beyond simple mechanization within industrialization; mechanization provided human laborers with machinery to assist them with various tasks. Automation greatly decreases, and in some cases, completely eliminates the need for a human presence.

Automation plays an increasingly important role in the global economy and in our daily lives. Engineers strive to combine automated devices with mathematical and organizational tools to create complex systems for a rapidly expanding range of applications and human activities. Active since 1984, the IEEE Robotics and Automation Society established a major archival journal on Automation Science and Engineering to publish the abstractions, algorithms, theory, methodologies, models, systems, and case studies that can be applied across industries to significantly advance efficiency, quality, productivity, and reliability for society.

This category has the following 19 subcategories, out of 19 total.

Retrieved from "https://ethw.org/w/index.php?title=Category:Automation&oldid=102237"
Category:
This page was last edited on 22 July 2014, at 16:16.
About ETHW
Policies and disclaimers