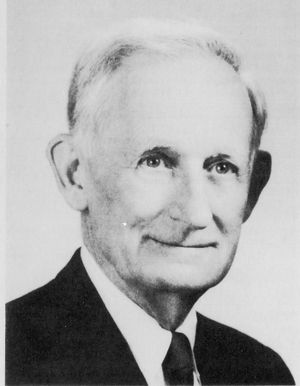 Park was born in Strassbourg, Germany on March 15, 1902 of U.S. parentage. He earned a BS degree in electrical engineering from MIT and then studied methods of operational calculus under Professor Henning Pleijel of the Royal Technical Institute in Stockholm, Sweden. He then entered the employ of the General Electric Company and completed its Advanced Course in Engineering. While associated with with Robert E. Doherty and C . A. Nickle, Park made signal advances in synchronous machine calculations and discovered a transformation which reduced the differential equations to a solvable form. His equations are regarded as the definitive description of a synchronous machine and are internationally known as "Park's equations." Several hundred papers and a dozen books have exploited these famous equations and several professional careers have to a large extent been based on them. These celebrated equations are equally applicable to induction and commutating machines, as are the alternative transformations of Yu Hsiu Ku and W. V. Lyon. While with the General Electric Company Mr. Park also made outstanding contributions to the analysis of magnetic fields and the calculation of electromagnetic forces as well as to the solution of the system stability problems. The latter introduced the famous "equal area criteria" and a step-by-step method of analysis. He was the first to apply traveling wave theory to the calculation of circuit breaker recovery voltages. These investigations culminated in the publication of six remarkable papers, each a classic in its field.

After his brief but productive tenure at General Electric Mr. Park in l929, joined Stone and Webster Engineering in Boston in the capacity of an electrical engineer. In 1931 he was employed by the Calco Chemical Division of American Cyanamid Co., of Bound Brook, New Jersey, as a chemical engineer in charge of physics research where he was responsible for developments in spectrophotometry, absorption systems, recorders color prediction, and electric heating devices. During World War II, Robert Park was associated with the Naval Ordinance Laboratory in charge of mine development, the Naval Operations for Air as consultant, and the Bureau of Ordinance on torpedo research. As a result of these contacts he made many contributions to the war effort, as attested to by 17 patents be assigned to the United States.

In 1946 he accepted employment with Emhart Manufacturing Company of Hartford, Connecticut, where he was made Director of Research Development and Engineering. He became an independent consultant in 1953 with headquarters and research facilities located at Brewster, Mass., and with activity primarily in the field of development and production of automated machinery. In 1968 he became president of Fast Load Control, Inc., which owns patents that pertain to methods of improving power systems stability via the use of fast turbine valving. Mr. Park was a member of the IEEE, the ASME, the American Institute of Consulting Engineers, the American Institute of Chemical Engineers and the American Institute of Physics. He was awarded the Navy Department Distinguished Civilian Service Award and, jointly with W. F. Skeats, the Best Paper Prize of the AIEE in Theory and Research for 1930, and in 1972 he was awarded the Lamme Medal of the IEEE. He held 64 U.S. patents distributed in a diversity of categories, including electrical machines and stability, electric heating, mines and torpedos, chemistry and physics, glass and plastic container technology.

As an engineer and scientist, Robert Park was characterized by an extraordinary capacity for work, unusual tenacity of purpose, a wide range of interest, a high degree of physical insight and unusual mathematical and analytical ability.

Retrieved from "https://ethw.org/w/index.php?title=Robert_H._Park&oldid=173821"
Categories:
This page was last edited on 15 February 2019, at 19:20.
About ETHW
Policies and disclaimers