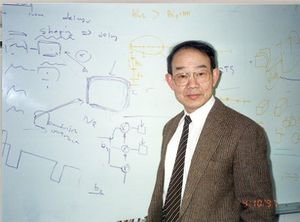 Bede Liu’s pioneering work on signal processing focused primarily on lowering implementation complexity and reducing power consumption, which have been central to the creation of cost-effective, high performance, low-power signal processing, important in the development of mobile and multimedia systems. To battle the cost of implementing digital signal processing algorithms, Liu developed novel methods that require much less computation by replacing computation with memory. His revolutionary approach of incorporating simple shift-and-adds for multiplier-free filters provides a 3-to-1 savings in computation over the traditional methods, thus enabling highly efficient implementation of digital filters and the fast Fourier transform algorithm. Multiplier-less processing has been widely used and commercialized in chips for control and imaging applications, dynamic signal analyzers, and a discrete cosine transform chip that was the fastest at the time. Liu’s proposal to use 1-bit coefficients on over-sampled data achieved significant savings in chip area and power. This approach is now widely used to allow for tradeoffs among clock rate, area, and power consumption in implementations for applications including mobile information devices. In video coding, Liu’s novel way to determine motion vectors that reduces computation by a factor of 4 was incorporated in software packages and also led to a number of other proposed efficient approaches. In video analysis, his proposal to use reduced resolution processing to extract video content cuts computation by two orders of magnitude. He also developed novel ways of transcoding the conversion of an encoded video bit stream to another with a smaller bit rate in order to adapt to network conditions.

An IEEE Life Fellow and member of the U.S. National Academy of Engineering, an academician of Academia Sinica (Taipei), and a foreign member of the Chinese Academy of Sciences (Beijing), Liu is a Professor Emeritus with the Department of Electrical Engineering at Princeton University, Princeton, NJ, USA.