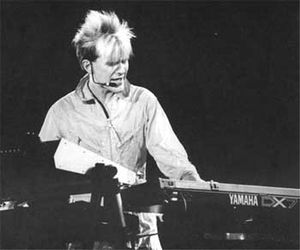 The Yamaha DX-7, a keyboard musical instrument using digital synthesis technology, was perhaps the most famous of the first wave of relatively inexpensive digital musical instruments introduced during the 1980s. It was popularized by such artists as Talking Heads, U2, The Cure, Elton John, Queen, and probably hundreds of others.

Yamaha, a Japanese manufacturer, was already the world’s largest maker of musical instruments when, in the 1970s, it began working on a new line of electronic keyboard synthesizers. It purchased the rights to use the digital synthesis technique developed earlier by engineer John Chowning, and offered its first digital keyboard in 1979. Almost immediately the company began looking for ways to make the instrument less expensive, and in 1983 it introduced the DX-7.

The basis of the DX-7 was so-called frequency modulation (FM) synthesis. Earlier synthesizers used electronic circuits called oscillators to form their basic tones. A series of oscillator tones were usually mixed together, and then passed through other circuits to modify their sound. The result was an enormously complicated circuit. In Chowning’s FM synthesizer (the term was borrowed from FM radio), the basic tone was still generated by an oscillator, although now the tone was the carrier. The carrier tone was then modified by other oscillator circuits, which Chowning called operators. The carrier and operator were not mixed together, but rather the operator controlled the frequency of the carrier. By controlling the frequency of an audible carrier with a fairly low frequency operator, the result was extremely rapid variations in the frequency of the carrier, which, at low frequencies, the brain hears as a wavering sound or “vibrato.” But, if the frequency is raised to a certain point, the effect of the operator is to modify the very nature of the carrier’s basic sound, or timbre. One of the easiest effects to achieve this way is to make the steady tone of a sine wave signal sound more like a bell. If additional operators are added, they interact with the carrier and with each other in very complex ways, and the timbre can be reshaped to imitate a range of instruments and other sounds. But controlling the frequency of the operator circuits becomes extremely difficult.

It was in response to these difficulties that Yamaha designed the DX-7. In a DX-7 operator signals were created by digital circuits, which produce very regular oscillations but which are not prohibitively expensive to use. The DX-7 keyboard used a set of six operators and other circuits that could be combined in various ways using a bank of switches, to produce an enormous range of sounds. Setting up the keyboard for playing was called “programming,” reflecting the terminology of the computer.

Apparently many DX-7 users found programming the device too difficult, and preferred instead to use the preset voices provided with the instrument. The credit for programming these voices goes to two individuals, David Bristow in the United Kingdom and Gary Leuenberger in the United States. The two developed a range of “voices”—imitation of bass guitars, brass instruments, bells, marimbas, the sound of a Fender Rhodes electric piano, and numerous special effects.

For several years following its introduction, Yamaha sold an estimated 180,000 DX-7s. While it was eventually superceded by improved models (including some offered by competitors) it is remembered by thousands of musicians as their introduction to the world of digital synthesizers.