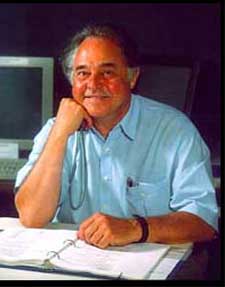 John Chowning, one of the “fathers” of digital music, was instrumental in making digital music synthesis in “real time” possible. He was born in 1934 in Salem, New Jersey. After serving in the military in the early 1950s, where he studied music at the Navy School of Music, he returned to school to earn a bachelor’s degree at Wittenberg University in Ohio in 1959. Pursuing his interest in music, he obtained masters and doctoral degrees at Stanford University. In 1964, while still a graduate student, he became intensely interested in computer music, then still in its infancy. With Max Mathews of Bell Labs and others, he established a research program in computer music, using one of Stanford’s computers and software developed by Matthews.

Within a few years, Chowning was exploring new ways to design music synthesizers. He explored the use of frequency modulation to create and shape audio waves. By adapting laboratory equipment such as signal generators, he was able to demonstrate a simple and effective way to synthesize complex tones. While other researchers had used similar signal generators to produce musical sounds, Chowning’s technique required much less equipment, suggesting that it would be better suited for creating simple, reliable musical instruments. His results were presented in several technical papers and a talk given at the 1973 meeting of the Audio Engineering Society.

Stanford University officials, eager to commercialize Chowning’s discoveries, attempted to attract electronic home and church organ manufacturers. After a frustrating search, the Yamaha Company in Japan, then the world’s largest manufacturer of musical instruments, agreed to license the basic technology. By the late 1970s, Chowning’s ideas had been incorporated into an expensive—but impressive—digital music synthesizer called the GS1. Since that time, Chowning’s FM synthesis has become one of the standard means of producing electronic music. In addition to influencing “synth” design, FM synthesis also gave the personal computer a voice, when Chowning’s techniques became the basis of “sound cards” for sound input and output. These cards were originally popular for playing computer games, because they allowed the software to synthesize nearly any type of sound and feed it to the computer’s loudspeakers. Made famous by the popular “SoundBlaster,” the sound card has virtually become standard equipment on all computers.

Meanwhile, Chowning had also conducted research on the “spatial” properties of sound—such as the illusion that stereophonic sound produces. Still a musician at heart, he not only studied the way that the brain perceives sound in space, but also composed and performed musical pieces to demonstrate his studies. In 1975, he and a group of like-minded professors found the Center for Computer Research and Musical Acoustics at Stanford, which later employed (among others) the famous electrical engineer John R. Pierce. His research on the spatial aspects of acoustics was influential in later years in the creation of “surround sound” and other advanced, multi-channel sound recording and reproducing systems.

Today, John Chowning holds the title of Osgood Hooker Professor of Fine Arts and Professor of Music, emeritus at Stanford.

Retrieved from "https://ethw.org/w/index.php?title=John_Chowning&oldid=146301"
Categories:
This page was last edited on 1 February 2016, at 16:03.
About ETHW
Policies and disclaimers