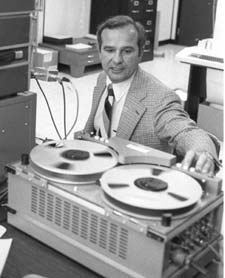 In the late 1960s Stockham began experimenting with digital tape recording and in 1975 he and business partner Malcolm Low founded Soundstream Incorporated in Salt Lake City. Soundstream was the first commercial digital recording company in the United States. From 1975 to about 1980 Soundstream developed new digital audio recording technologies for professional use. Stockham and a team of engineers and technicians began perfecting the art of making digital master recordings with a computerized editing system and pioneered tapeless hard disk editing. In 1980 Soundstream merged with Digital Recording Company and became DRC/Soundstream.

A highlight of Stockham’s career was a 1975 paper published in an IEEE journal, which was called “Blind Deconvolution Through Digital Signal Processing.” In this article, Stockham discussed his work restoring (through digital techniques) old phonograph recordings of famous Italian opera singer, Enrico Caruso.

During his professional career Stockham received a number of prestigious awards, including an Emmy and Grammy, for his contributions to audio technology.

Retrieved from "https://ethw.org/w/index.php?title=Thomas_G._Stockham&oldid=173226"
Categories:
This page was last edited on 1 February 2019, at 15:09.
About ETHW
Policies and disclaimers